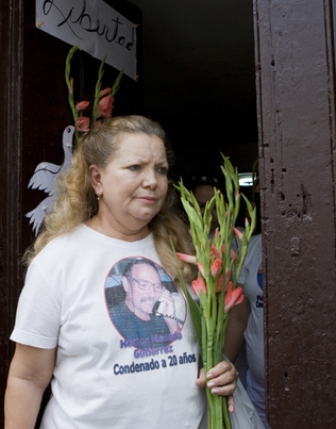 It has been two years since Laura Pollan abandoned her physical presence and became eternal.  Now she is in the Sta. Rita Parish, the Quinta Avenida walk, and in many Havana streets where they saw her walking invincible clutching her peaceful gladiola.  She is also in her family, who lived and saw grow her example of a small woman who demanded liberty for political prisoners and rights for Cubans in general and who confronted the paramilitary mobs however huge.

She is in the world, which followed her brave citizen journey and distinguishes and remembers her with the respect and dignity that she deserves, and she is also in all of us who pay tribute out loud through the media or in the anonymous silence of our thoughts.

From her clear eyes she gave us the clarity of a journey that is shortened more each day in order to truly institute respect for fundamental rights of all society and to democratize our country.

She contributed her integrity and efforts to shorten that distance and to make the government’s decadent hardliners release — even with the legal structure of their election — the Cuban political prisoners that had been sentenced to disproportionate penalties for peacefully dissenting from the Castro dictatorship.

This October 14 we faced again an act of repression, intransigence and abuse on the part of the Cuban government against the Ladies in White.  The violent eruption of pro-government gangs at #963 Neptune Street, the headquarters of the organization that was Laura’s home, when they were about to carry out a tribute for the second anniversary of her death, is a proof of how much some government leaders exert themselves to feed the infantile fairy tale of “citizen justice” that “spontaneously” defends the inefficient government that ruined Cuba and that “sacrifices itself” in command for more than 50 years.

That well-crafted, although unworthy strategy of turning society against itself is a tall tale designed to intimidate people and keep them paralyzed so that they can continue to easily exercise power and control.

Between the years 2010 and 2012 we lost several comrades in arms.  They were three consecutive years that made the world pay more attention our country and be concerned about those deaths so opportune for the Cuban regime.

Laura left us in 2011 and the future of Cuba is still being decided between ineluctable changes that will necessarily come, the minimum proposals to day from  Raul Castro, which do not solve Cuba’s big problems and the potential ones which the government undertakes in trying to carry out in order to keep or recycle the fiefdom that they inherited from their relatives and staunch supporters from the highest military ranks.

The year 2013 is almost over and he offers Cuba true and false signals that the authorities detail in order to confuse the international community, but mainly in order to prevent the country’s senior management from changing hands.

Laura, like many, knew this, so from the field of flowers where her daughter stands alert, combative and victorious, and her example is multiplied and many other gardens of gladioli continue to march to achieve a real democratic state of law in Cuba, and to prevent another group of dishonest men from kidnapping the country’s government.