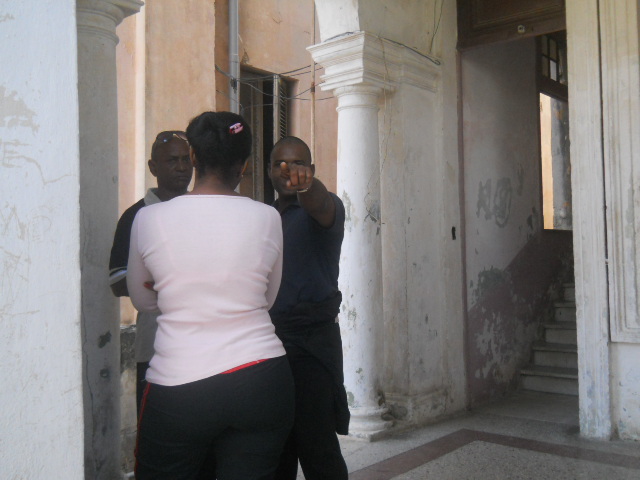 In his time, Marti wrote “arms are iron.” It is the iron I perceived confronting the agents of Section 21 — State Security — posted in the doorway of Lilia and Jose Alberto’s building at J and Calzada, this Thursday, November 1.

It is not the iron Marti spoke of.

My plan this Thursday was to go by the home of Lilia and Jose Alberto with the intention of collecting the story of the raid they have suffered, very similar to that of Silva that I related in my last post.

Counting on a bowl of soup that would be my lunch, because for more than a week now Lilia and Jose Alberto have opened their house (which normally is a welcoming place to have a conversation while one awaits any kind of paperwork or service at the USIS) to offer those who come a bowl of soup, in a city where for a lot of reasons, from hygiene to economic issues, snacking or having lunch in the street isn’t recommended for the ordinary Cuban.

We’ve given it the name “Dissident Soup” and the way the cost of making the soup is dealt with is through the efforts and goodwill of many friends.

As I approached I was surprised to see opaque figures in the doorway: three men and two women personifying the iron talked about, stationed there to block the coming and going — State Security Agents. 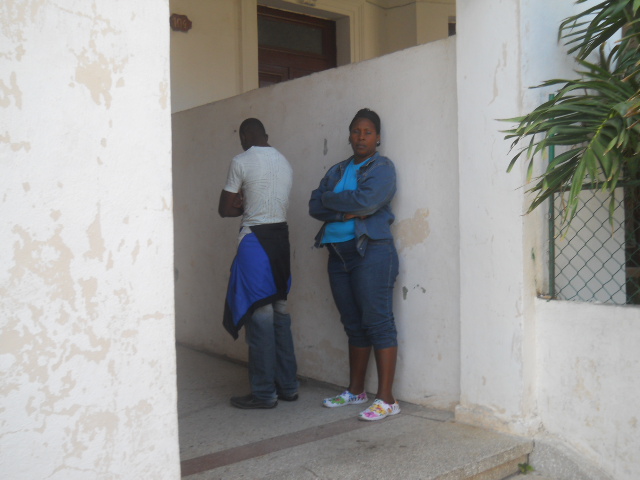 I have the impression that it is essential not to fall into the trap of “familiarity” between hostages and kidnappers, however much the faces and names of our pursuers are already known. We must convey to those State Security agents, by all possible communication channels, from the attitude to the verb, that we are not equals, nor do we operate at the same level, there is no bond nor familiarity, because they are unable to talk in a natural way to the opponents of the power they represent.

A few minutes later Noralis arrived at the door (the 23-year-old Lady in White) and her husband. We couldn’t enter but we could tell them some truths to their face, among them not understanding what motivates them to violate the rights of citizens in the name of what? A political party? A group of leaders who will never again be credible because they can no longer fool anyone?

But the agents aren’t programmed to respond. We couldn’t even confirm that they heard and understood what we were saying to them.

After 3 hours, those who had been blocked from entering Lilia’s house, and unable to see her, should have walked again by her house. It was not possible to walk by and not ask about the wellbeing of our friends because to do that would have meant giving in, obeying the orders, and showing fear/intimidation. God does not let me fear anything but myself and my sins. I don’t know if others understand this, but I have Christ in my heart, hidden in the core of my soul, and he does not let me fear situations such as this one. So I joined those who decided to return to Lilia’s house.

(Once more I confirm our capacity to object to injustices even though we know there is no institution to protect persecuted civil servants from the abuses and arbitrations of the state. So we have no option but to challenge them and risk their reprisal from which only God can protect us, and to denounce the criminal character of those revolutionaries, defenders of something called socialism and everything else that makes no sense to a discerning mind. In this way, with the urgency for a new social, institutional, political, and business structure, we can start substituting the actual bandits that surround us. Defeat them without iron with our faith in what’s inside us that’s most sacred: the desire to do good and to practice justice, not with “grand ideals” but with the simple truths of our existence which is what’s most useful and meaningful.)

Now the street was full of agents and some uniformed police. This time we made it clear to them that we knew they we could not enter by force, but we were there to find out about our friends. We knew the answer they were going to give us, but the important thing was to be there, not the words.

I was again struck by the phenomenon that if I did not remember that there in one Declaration of Human Rights for all of humanity, that I would have thought they belonged to another humanity, the type of humanity their commander advocated. But no, even though I might regret it, while they are trained to repress and hate those who oppose the Castro brothers, and they act like robots, they are nothing else but humans and they have more rights than they themselves recognize.

The boss, who said his name was Erick, and was second in command of Section 21 (in one of the photos his index finger is pointing) used a threatening voice when I insisted on knowing what happened to my friends, and then walked away to make a call; then I repeated my request to one of the women: “I want to know what is the situation with Lilia and Jose Alberto” and I looked in her eyes for a sign of humanity, but she fixed her eyes on mine in the way she had been trained. I was only able to count 15 seconds and I concluded that it was not important to maintain the stare, that human eyes can only tolerate a locked stare for a fix amount of time, except in cases of Mystical Hindu practices or early Christianity. It was inhuman to maintain a locked stare indefinitely because anything superhuman, from Nietzsche (Zarathustra) to Castro, was useless robotics.

Long ago those wearing the olive green uniforms stopped being the good guys. Ever since January 1, 1959, but they were able to confuse a lot of people. Goodness, according to human nature, and similarly, happiness, wisdom, beauty, God are somewhere else, where there is no agreement or disagreement: they reside inside each one of us, and if we can express them we’ll be free knocking down the iron.