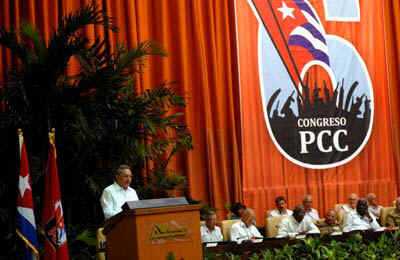 The General, in the framework of the Central Report to the Sixth Congress, made reference to the need for new journalism. Picture taken from the Internet.

A friend of mine, knowing about my quest for information and of my online time constraints, is kind enough to send me, from time to time, items he considers “interesting”, published in places that I don’t usually visit basically because of the above reasons and for my preference to prioritizing other venues within those limits.

Recently, the same friend has brought me two works published in Kaos on the Web, a site commonly classified as “leftist” and heavily visited by fundamentalists of various stripes, judging by the tone of many of the comments they dump there. These articles (“Cuba: Raúl’s worst enemies,” of April 4th, 2011, and “Yoani Sánchez and Cuban TV compete in their clumsy Manichaeism” of April 7th, 2011) are signed by a person calling himself Orlando Pérez Zulia, a Cuban with no other details, who, under apparent critical presuppositions about the reality of the Island, only succeeds in throwing dirt in the readers’ eyes, a practice much employed by more than a few collaborators of such a website.

I think I should stop and briefly explain two points about this issue: 1 — Why, if the articles mentioned seem so biased to me, do I waste my valuable time commenting on them? And 2 — Why does my kind friend classify these articles as “interesting”?

The answer to the first question is very simple: It’s clear that Kaos — voluntarily or otherwise — serves to support the authorities’ campaign of demonization against Cuban dissident sectors, in particular against the blogosphere, though its support for the government is presented — as happens in this case — masked in a language apparently critical of official sectors, in what constitutes an insult to people’s intelligence and an infamous manner of contributing to the chronic misinformation that affects Cuban society. It’s imperative, therefore, to denounce the exercise of media hypocrisy hidden behind this maneuver.

Regarding the second question, the answer is that my friend has undoubtedly become a victim of the illusion projected by Kaos: he wants to prove to me what he considers a sign of change. According to him, these types of articles seem “interesting” in that they indicate, at the very heart of the revolutionaries, the emergence of a critical group that openly and courageously points out the faults of the system. My good friend thinks that this official sector could help in transitioning a future Cuba into a more democratic and inclusive country. Such naiveté!

So it’s not exactly a useless waste of time to analyze in brief the result of the neuronal outgrowths of Orlando Pérez, without inferring intent to exhaust the subject completely, or attempting a theoretical positioning of someone who seems to consider himself a thinking bombshell. I do not intend to ascend to such a high level of intellect.

I couldn’t begin to enumerate here the number of words and empty phrases deployed in both his writings, which stand out for their lack of substance. I’ve become bowlegged in the face of some that I have found truly novel, but what is incredibly sinuous is the discursive strategy of attack against both dissident writers (independent journalists, alternative bloggers, etc.), as against the official media, including the regular press and Cuban TV, the latter charged — or so Orlando tells us — with spreading false social and economic achievements of the revolution and giving credit to dissidents for devoting space to its stoning. I admit that, in this, we have some common points. Either way, this position also curiously coincides with the criticism that the Gray General directed at official journalists in his Central Report to the Sixth Congress of the CCP … Pure coincidence?

However, a position as “condescending”, yet energetic, on Orlando’s (?) part, with its masquerade of justice, tends to sanctify as tested truths certain lies that also circulate through the official media, born of invocations from the constant repetition of “information” about internal dissent, particularly their mercenary character with respect to the ever-satanic Northern Empire (the “wealth” of some of these mercenaries, stemming from payment of their salaries reaches fabulous figures, judging from these and other means, which Orlando also asserts). But the writer fails to go beyond the exclusionary nature of the system and its representatives, when one attributes the ability to determine how and who can disagree with the government. The subliminal message is clear: “the right to dissent is for revolutionaries”. Without a doubt, the desperation of this regime is making its lackeys give birth to truly amazing subterfuges.

Of course, the direction of the revolution is still being presented as immaculate in the writings of this champion of fair criticism who — as any other follower of the dictatorship — shows signs of generous and profuse flattery: “President Raúl Castro has undertaken a Cyclopean task to route Cuban society through the trails of efficiency, which will culminate into a minimum state of welfare, always promised to our people but frequently postponed. His speech at the closing session of the December 18th, 2010 National Assembly of Popular Power was impressive by his clear and forceful self-criticism”. This is stated by the writer as a premise to a new generational Messianism, according to which “Cuban revolutionaries” are being summoned at this dramatic hour to assume “a commitment of historic dimension”. It’s the new “Now, indeed!” of the hour, which assures us, by the reforming hand of the cabinet General, his exemplary punishment of the corrupt and deceitful leaders (like himself, I would add), the advent of the promising future with which the regime has gripped our lives for the past 52 years.

It turns out that Orlando Pérez, like his ancient olive-green idol, is also a reformer, something like a reformism theorist. That is why he considers it “a mistake” to attack all internal dissidents alike, since they are not all “pathetic hustlers”, “brainless puppets”, or “mercenaries without values” (the latter suggests the existence of “mercenaries with values”, a complete tribute), so he asserts that Yoani Sánchez — paradigm of evil, witch among witches — should be allowed to leave Cuba so she can show “the shallowness of her analyses” (she is “a lesser being”). That is why Orlando (“a higher being”, for certain) also wonders: “Are individuals who have been or are still imprisoned for unclear crimes menacing enemies, who are often limited to express different ideas, though some of them have flexed their muscles in the foreign news media? Are those who have done so without being jailed also menacing enemies? And in the next sentence he states that they are not a menace, which has been demonstrated by the “unilateral” liberation” (?) that they have been receiving. It might seem that political prisoners released in recent months — due to the many pressures on the Cuban government, both by foreign governments and institutions, and by civil society groups and dissidents within the Island, and not by the political willpower of the dictatorship — belong to a faction that is also holding government representatives imprisoned and has not agreed to give them their freedom in turn. Or that independent journalists in Cuba waste opportunities they are offered to publish in the national media, so they publish (muscle-flex) in the foreign media.

Orlando is a very sharp guy, so he arrives half a century behind with the discovery of “the serious errors leading to the prevailing precariousness and its consequences: corruption and absurd and ubiquitous prohibitions, both born of the glaring incompetence of the methods used, to date, to produce confidence and prosperity”. And only a group of corrupt officials, notable among them, “the sons of Acevedo, of Guillermo García, of Maciques, of Lusson and of Torralba”, among others, are responsible for those evils that dissidents point out in such vile and opportunist ways. So easy and simple. Not the Castro brothers. They are not responsible for anything. Because, without a doubt, the writer knows the golden rule of the tricks of the trade: play with the chain, but don’t touch the monkey, so he takes good care of not reporting the names to the nouveau riche, the original sin that accuses Yoani and El Nuevo Herald. As you can see, he is indeed a convincing guy.

I must admit, however, that Orlando (why does that have a false ring to me?) is right, at least to the extent that the official media are liars, boring, tiring, manipulative and insistent. However, he avoids basic issues: whose media is it? Is the national press better than the media trash he criticizes so much? Why doesn’t he mention that the eyesore Cuban TV also illustrates the “cultural decadence” that affects our nation? And, as far as the alternative media, specifically the blogosphere, why does he try to present Yoani Sánchez as dissident analyst of the Cuban reality, a title that she has never claimed for herself, instead of mentioning a space of such serious and substantial analyses of our history and our reality as, for instance, El Blog de Dimas? (this is a rhetorical question. Obviously, reading that website would leave the referenced writer standing in his underwear on his lofty platform of media purity).

Maybe Orlando Pérez Zulia — who would be more credible and respectable if he had presented himself with his true identity in any forum — may be part of a new and devious official strategy born out of impulses of the much publicized and artificial “media war” a new conflagration designed by a government that thrives only in confrontations. At any rate, with or without a pseudonym, he has shown with these two deliveries that he still has a lot of imperfections to polish in his worn-out race of web misinformation. May he forgive me if I don’t wish him luck in his endeavors.

The General, in the framework of the Central Report to the Sixth Congress, made reference to the need for new journalism. Picture taken from the Internet.