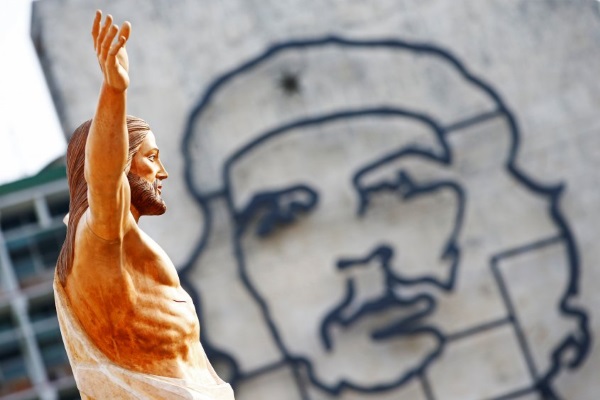 Cubanet, Miriam Celaya, Havana, 24 September 2015 — The recent visit to Cuba of the Bishop of Rome, Jorge Mario Bergoglio, brought a flood of masses and homilies in several different settings, where, among others, two words were often heard in the context of the Cuban landscape: forgiveness and reconciliation. They were all the more curious since they were not evoked at the same time as those other words to which they are unavoidably related: offense, confession and repentance.

In this fashion, Francis urged all Cubans, believers or not, to reconciliation in the abstract and forgiveness of no particular offense, an exhortation so cryptic and watered-down that it well could have been uttered anywhere in the world. Who are the offenders and the offended, what do offenses consist of, whose turn is it to forgive and who will be the forgiven were matters that were left to each individual to ponder. The Pope also spoke of “suffering of the poor,” of “respect to differences” and many other similar phrases that can assume conflicting interpretations according to one’s point of view.

In any case, forgiveness and reconciliation have different nuances, depending whether they stem from theology or from politics. Let us assume, then, that Francis remained more attached to the first, given his status as a clergyman, though we must not forget that he is also a head of State, a politician and a diplomacy maker representing very particular interests – beyond his good intentions towards the Cuban people — and with no responsibility at all for solving the serious problems facing our nation.

In case there is doubt, the Pope had announced himself in advance as ‘missionary of mercy’, which strips this visit — at least in the obvious — of any political overtones. It is fair to understand the Supreme Pontiff’s delicate position that aims to sail to a safe harbor. Further considering his complicated role as mediator between God and Catholics, and even between rival governments — as has been plainly demonstrated on issues of the restoration of US-Cuba relations — it could be argued that he played his role with dignity during his stay in Cuba.

Because of this, anyone who had expected the Pope to give the dictatorship a scolding, to extend some considerate gesture towards the dissidence or to adopt a position of outright rejection of the Lords of the Palace of the Revolution has been greatly disappointed. The Pope might have done more, but we already know that the ways of God’s ministers on earth are as inscrutable as the Lord’s.

However, once we acknowledge the unpredictability of words, the time may be is right to put them in context and give them the interpretation they deserve from a closer perspective to mundane issues. Let us try to reconcile Bergoglio’s case against reality, plainly assuming that the Pontiff might have implied that Cubans should forgive crimes and abuses inflicted by a dictatorship about to celebrate its 57th healthy anniversary in power, a regime that has never shown any interest in our forgiveness, never confessed its countless mortal sins, and remains ever reluctant to show any repentance.

Should we merely forgive the oppressors, informers and other despicable humanoid instruments used by the dictatorial power to repress, which they continued to do even at the very moment when the Pope launched his message of peace? Is Bergoglio asking of us, without further ado, to place a veil of piety over victims of the firing squads, over the innocent dead of the “13 de Marzo” tugboat and over all the crimes committed by the Cuban dictatorship over more than half century?

He does not have the right to do so.

If we Cubans want to build a healthy and free nation, devoid of the grudges of an ominous past, if we aspire to the Rule of Law, we must mention the word justice before pronouncing the word forgiveness. We must not make the mistake of ignoring and forgetting the pain of thousands of Cuban families or we will suffer the consequences: revenge, punishment and resentment. Without justice there will be no harmony, because it’s a well-known fact that ignoring the horrors of the past has never been a basis for achieving national peace.

Recent history is rich in examples of processes of reconciliation and forgiveness in different countries. Suffice it to recall typical cases, such as the Spanish National Reconciliation of 1956, a proposal aimed at overcoming the schism caused by the Civil War won by Franco; or that of Chile after the military dictatorship of Augusto Pinochet; or of South Africa at the end of the apartheid regime and the creation of the Commission for Truth and Reconciliation, through which the moral condemnation of perpetrators of many violent crimes and of multiple human rights violations was achieved, a process that allowed victims the opportunity to offer their testimonies and publicly accuse their abusers.

Other examples, perhaps less conspicuous though no less valuable, are the Commissions of Truth and Reconciliation that were created in Peru to clarify the acts of violence experienced by the Andean country, victim of terrorism led by the Shining Path and the Tupamaros groups, and the military repression from the late 1970’s until 2000; or that of El Salvador, at the end of its bloody civil war, to unravel the human rights violations that took place in that Central American country during the conflict.

Perhaps someday we Cubans will have to democratically assume the responsibility to choose between impunity or condemnation of the perpetrators for the sake of the reconciliation and reconstruction of our nation’s moral force. Perhaps it will be impossible to fully satisfy the thirst for justice of all the victims. The moral condemnation of the perpetrators, at least of those who have not committed bloodshed, might be preferable for Cuba’s spiritual recovery.

If we opt for generosity, a known character trait of our people, as demonstrated in accepting, at the time, tens of thousands of Spanish immigrants — including the parent of today’s dictators — in the Republic born after the last war of independence against Spain, harmony will exceed grudges, and we will prevent the establishment of the new country over another spiral of hatred and exclusions.

But the patterns of a true national reconciliation will not be dictated by the speeches of mediators or by the practices of the same victimizing power. In order for the country to achieve true spiritual recovery and lasting democracy, Cuba’s own people – whose dreams and voice are still unacknowledged — will need to be the ones to decide to forgive or not their executioners. For now, the culprits have not shown the slightest sign of humility or repentance.