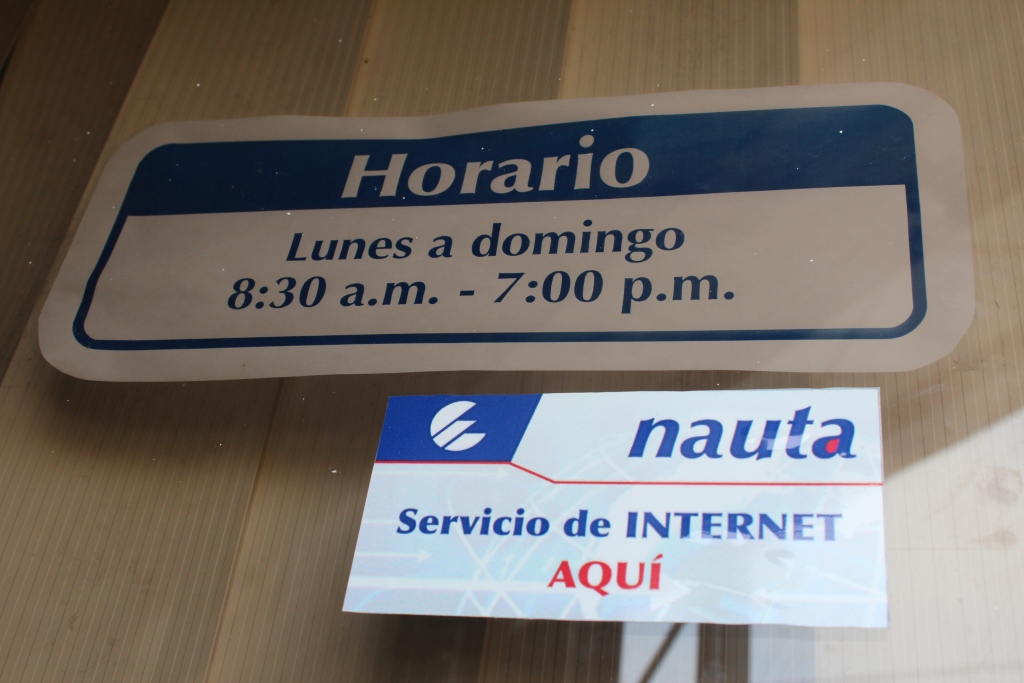 Last Wednesday June 5th, at the end of the Telesur programme “Today’s Themes”, our brilliant journalist Iroel Sánchez commented about the “novelty” of the rooms enabling “free” Internet surfing throughout Cuba.  That more than two decades after the Internet became a daily portal for the rest of the world it is even announced in Cuba, with fireworks, that from 118 timid locations in this country of more than 12 million inhabitants will be able to surf “freely”, says it all.

But there are various angles of the issue that Iroel didn’t comment about on Telesur: he didn’t mention the little detail that he himself has had free complete access to the Internet, because it is among the privileges of “official” reporters to access the network from their offices or comfortably from their homes *and* it will be like that as long as he doesn’t  transgress the line of the Rubicon, while Caesar, attentive and scowling, calculates every byte.

Iroel didn’t say that in our case, the connection time is dependent exclusively on the times ETECSA offices are open (from 8:30AM to 7:00PM) in rooms in which between 2 and 6 machines are available — for example in Artemisa, a provincial capital of 800,000 inhabitants, one can only find two — and these tiny pieces wouldn’t be enough if they had conceived of a reasonable price and not an absurd and crazily extorsive one.

He didn’t say that at 4.50 CUC — which is the same as 112.00 Cuba pesos or equal to a third of the average worker’s monthly wages — which would be the same as the charging the average Spaniard 250 Euros for an hour of surfing, but with the additional aggravation in the case of Cuba of living in the most expensive country in the world.

Iroel Sanchez forgot all of these details when he was being interviewed by Telesur.

Meanwhile, this is how I see it: if the Cuban government says it is telling the truth, then why is it so terrified of an exchange of ideas? Because only information, pure ideas, translated into the most simple binary code, can enter the country along an optical cable, and never bombs or rifles. I have the conviction that all the truth, in its natural clarity, is as firm as a rock and can defend itself by its simple presence beneath the sun, for which reason I will never understand why they are depriving my people of something as basic as free access to the knowledge contained in cyberspace.

At times when my country talks about the prospects of transformation, which they are begging for, and on which the government timidly feels its way forward, while the society pleads for faster progress in the changes which sometimes seem more cosmetic than real, at times like that, this is what we get.

I have always said that I prefer a despot to a cynic because the former mocks you to your face, doesn’t hide his natural tyranny, and shows his true colours: yes, I abused you — so what? But the latter, evil at heart, tries to insult your intelligence. Because to claim that such stratospheric charges are affordable by the people, is equivalent to saying that so are the hotels which charge $300 per person — a year’s wages — for one miserable weekend.

Now they are trying to export the illusion that now we Cubans are living happily connected with the world, but they must know that this is a masquerade, as is demonstrated by the empty seats in these embarrassing locations. The Cuban people are awaiting and insisting on real, free, effective and total access to the internet, by way of reasonable contractual terms appropriate to what they can afford and which allow them to explore the virtual world, when they want and full-time.

I want internet in my home in order to explore all truths and weigh them up them against my own … like  Iroel Sánchez but with the difference that I want to have it as a right which I am exercising, and never as an improper privilege. For me that would be the measure that would tell me that finally we are on the path to real changes; as long as we can’t depend upon absolutely free access to the internet everything will be imitation gold and pure fantasy … just a fairy tale.