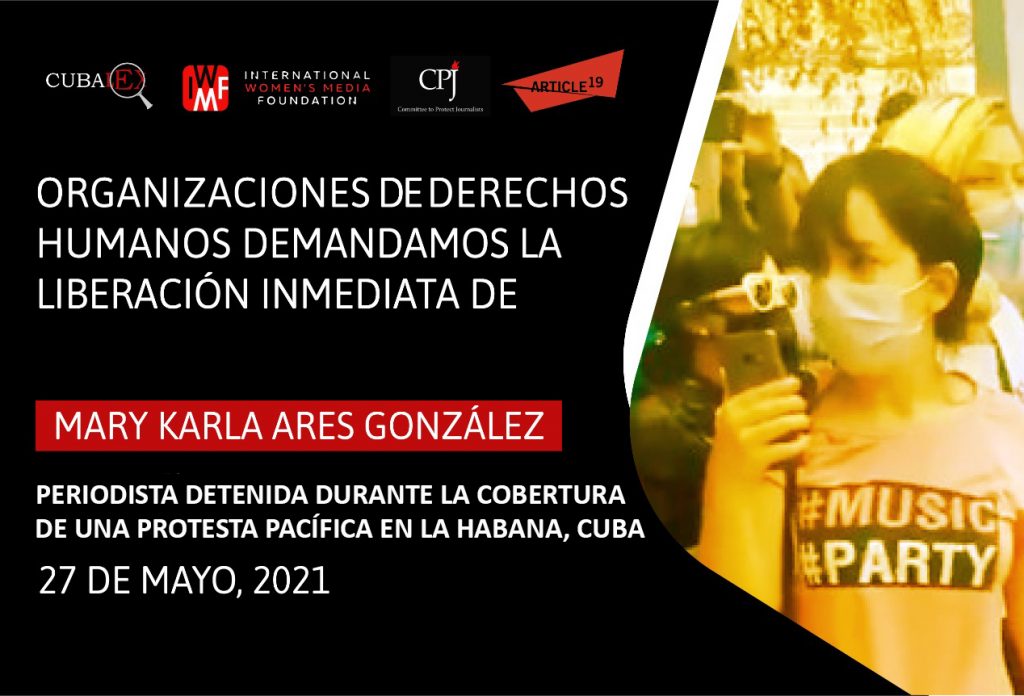 Cubalex, 27 May 2021 — The Committee to Protect Journalists (CPJ), International Women’s Media Foundation (IWMF), ARTICLE 19 Office for Central America and the Caribbean, and CUBALEX today demand the release of Mary Karla Ares Pérez, detained since April 30 in relation to her journalistic work.

Ares is being held in the Western Women’s Prison in Guatao, without trial, subjected to interrogations and deprivation, and in violation of her basic guarantees of due process. She was transferred yesterday, May 26, to the outskirts of the province of Havana, far from her place of residence, which will affect family visits and access to a lawyer due to Covid-19 restrictions.

Mary Karla, a journalist for the Cuban Institute for Freedom of Expression and the Press (ICLEP), broadcast live on Facebook the arrests made by police officers and State Security agents of people who were participating in a peaceful protest over the isolation to which Luis Manuel Otero Alcántara, leader of the San Isidro Movement (MSI), was subjected, after he had declared a hunger strike.

During this coverage, agents of the State Security Department (DSE) in civilian clothes, agents of the National Revolutionary Police and of the Prevention Troops, detained her on Obispo Street, in the Habana Vieja municipality, Havana province. They transferred her to the police unit of the Centro Habana municipality, and from there to the unit located in Playa.

This citizen journalist is subject to an investigative process, accused of the crimes of Public Disorder, and Resistance, punishable by three and five years of imprisonment, respectively. According to information provided by her family, she has been denied legal assistance.