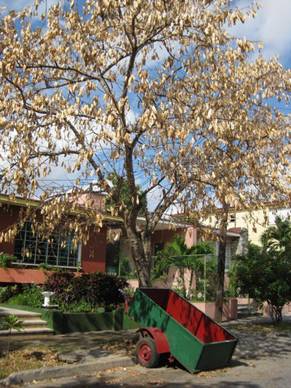 On the street where I live, a couple of months ago, the last tree that gave shade fell at the hands of a neighbor. It has been attacked on several occasions by this character. On one occasion, the girth of the trunk was split by a circle made around it, with the aim of keeping the sap from circulating and thus killing it. Horrified, I started phoning all entities responsible for the environment, for help. I called an office and was given the phone number of another, arguing that they did not address these issues and so on.

After communicating with a half-dozen different phone numbers, I found the company that took care of the green areas. They said they only thing they could do was to fine the aggressor 150 Cuban pesos (the equivalent of 6.00 dollars), but they could not save the tree. Outraged I tried my own methods to avoid its death. To do this, I took damp soil from around and very carefully made a kind of plaster around the trunk covering the wound with strips of canvas, like a bandage. Every day I went down to moisten the damaged area and pour plenty of water on the roots.

Some days passed and the tree began to recover and resumed its green leaves. I had saved it! But again the neighbor insistence reappeared to liquidate it. This time the deadly weapon it was oil poured on its roots, with the clear intention of drying it up.

Still, the tree survived, because the sap continued to circulate in the face of the trunk that was outside the scope of the predator. But, weakened as it was at the other extreme, it later fell on the perimeter fence, causing major damage to it and blocking the sidewalk as it leaned towards the pavement. The perpetrator of this disaster that sought out the Electricity Company, which was doing repair work in the vicinity, which came to cut it, because the tree also affected a cable that damaged his home.

This tree could have been saved with tension wires pulling it back into position, but this would have to have been in a civilized and thus organized country, where institutions exist that concern themselves with protecting trees, not in ours.

This, simply, was chopped with a machete and left in the same dangerous position. After several days, a brigade from the same company came, but this time equipped with an electric saw to cut it into pieces. As always, they only took away the large pieces of the trunk, leaving lots of branches and leaves scattered on the sidewalk, blocking the crosswalk: One tree less in a country where the sun beats on all of us equally. No one else can take shelter in its shade.

It is pitiful to watch how each day a growing number of trees are indiscriminately “killed” either by the residents or by companies not responsible for the care and maintenance of the green areas. The amazing thing about all this is that, even though the media in our country talks a lot about the environment and there are even television programs devoted to it and its conservation, there is actually no official place where one can go. We need to have the conditions and the power and resources necessary to enforce measures to protect flora and fauna.

The irony is that at this very moment, in session in the Palace of Conventions, Ninth Environment Symposium is being held. The protection and care taken for flora and fauna by the government and citizens should be indices that are taken into account by international organizations to measure the culture of a country.