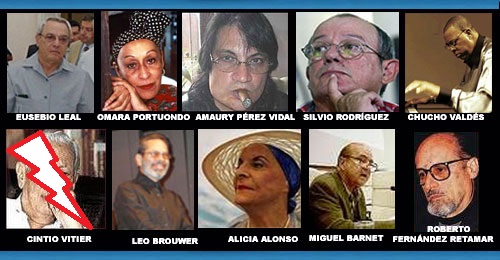 As the world shouts itself hoarse over what’s happening in Venezuela, the Cuban Network of Intellectuals, Artists and Social Movements in Defense of Humanity assures us that this is nothing more than a ruse of the “fascist right” and they’ve launched a tirade in very bad taste from the site “Segunda cita” (Second Quote), belonging to singer-songwriter Silvio Rodríguez (the worst taste yet).

Making it all worse is that this Network (hopefully not of the Wasps*) totally ignores mothers, daughters, sisters, loved ones, gossipy neighbors and relatives of another ilk who are in suspense for their loved ones in Venezuela. The brave and harmless Cuban workers (for example doctors or the sports instructors of the “Blas Roca” contingent) are trapped in the midst of violence and despair because they’ve been momentarily caught in their flip-flops between Caracaibo and Corralillo, or in the flow of laptop parts between the state of Lara and the town of Majibacoa, in Las Tunas. Their families in Cuban are screaming blue murder and now these intellectuals have come to “fuck it all up,” as a young Guantanameran has written to her boyfriend working as a nurse in Caracas.

“Finally, we call on international solidarity to squelch any attempt to impose violence in a country which is advancing firmly toward a society of justice, equality and peace,” concludes this letter from the “professionals of simulation**”, among whom are poets fighting for their literary event, historians praying to God not to take away their European fellowships, and musicians who aspire to give a concert in the hills of Caracas to put a sound track to the fists of the National Guard and the truncheons wielded by the brave boys of the Bolivarian National Intelligence Service (SEBIN).

Translator’s notes:
*A reference to the Wasp Network of Cuban spies stationed in the United States.
** A sarcastic reference to those who “simulate”… or pretend to believe… so as not to lose their perks.