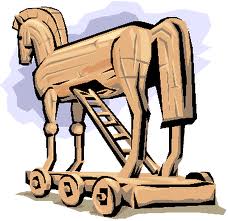 As of ten days ago, according to the Chinese horoscope, we’re living in the year of the horse, more precisely, the wooden horse. Many are the prognostications perceived by specialists in different spheres of life and for distinct signs.

Like the good pig that I am I see everything more relaxedly and, although I am not attempting any kind of international contamination between the East and West, the first thing I think is of the most famous of the wooden horses: the Trojan!

In this 2014 that began with the Summit of the Community of Latin American and Caribbean States, when the European Union is preparing to lift the restrictions of the Common Position, now that millionaires of the exile feel inclined to invest in Cuba, one wonders if the wisdom of Odysseus will bear fruit in this Caribbean Troy, if the walls will have to be partly demolished to let the artifact through.

As a curiosity, I have to add that throughout this whole process initiated in 1959 it is the first time that we have had a Year of the Wooden Horse.