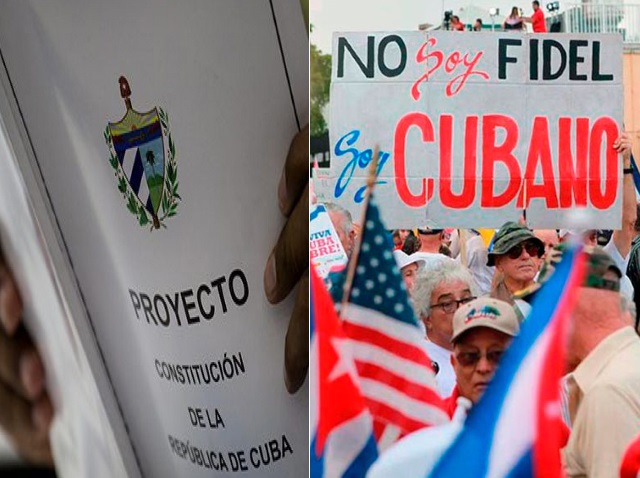 Cubanet, Miriam Celaya, West Palm Beach, 6 August 2018 — As expected, the Cuban government’s “invitation” for the “diaspora” to participate in the process of discussion of the constitutional reform project has unleashed a flood of diverse reactions, from the most absolute denial to the most ingenuous optimism through those who assume the proposal with caution without completely rejecting it.

In spite of the range of opinions, all these reactions are logical. After a 60-year schism in which the dictatorship has denied and discriminated against the diaspora — even more so than against the Cubans “inside” — depriving its members of their rights as nationals, making their visits to Cuba more expensive, and making use of them to squeeze the remittances that, through their work and their sacrifice, they send to their relatives and friends in Cuba, among other endless humiliations, their reluctance to respond to that same dictatorship’s invitation on the part of the emigrants is perfectly understandable.

From the other end of the spectrum, there are groups that consider it opportune to participate and let the government know their opinions about the reform, demanding participation as Cuban citizens — because they consider themselves to be independent of the will of the Castro regime — and, in passing, demanding the inclusion of the recognition of this and other rights that have been violated.

In the midst of both extremes, a sector of the diaspora doubts – and not without foundation — the intentions of such an unusual convocation, fearing that that this is another of the regime’s traps in order to legitimize itself, this time with the “support” of the exiles. However, it seems positive for them to be able to express their demands, though they wonder what guarantees they will have that their opinions will be considered.

Personally, in spite of the many reservations that any proposal that comes from the Cuban political power awakens in me, and the fact that I have flatly and publicly refused to participate in the “popular consultation” that will take place in Cuba around a project that I do not approve of, I will indeed go to the polls and stamp a NO on my ballot, because it is my right and the issue is of paramount importance. It is not about voting for a “delegate,” that sort of useful fool who fulfills the role of a wall of contention between the privileges of the political caste and the pressing material and spiritual needs of the “people.” Right now, it is about the Constitution that we are all subject to. That is why I will make an exception and go to the polls.

In accordance with that, I believe that the time is also opportune for the diaspora to respond to the official invitation and make their demands known, all their rejection of what they consider appropriate to reject and all their aspirations as Cubans. Not because of the conformism that “anything is better than nothing”, but because of how much their strength means for those who push for democracy from within.

On the other hand, it is still an achievement of that diaspora that the government has recognized its existence for the first time. Far from being a sign of strength of Cuba’s autocracy, it is a recognition of the power of these the three million Cubans abroad and a sign of weakness of a regime forced to give way due to the irreversible economic crisis, pressured by the accumulation of debts and overwhelmed by many other constraints. In Fidel Castro’s time, such a capitulation would not have been possible.

We know that by participating in the debate the exiles will not “knock down” the dictatorship, but fortifying us in denials will not make it happen, either. Let’s be realistic. Nobody is going to land in Cuba to wage a war to overthrow the government. Neither is it a desirable option for the vast majority of Cubans from any shore, I would dare say. What unites all of us who long for democracy is the end of that government, what differentiates us is the “how”. And needless to say, the leaders will not voluntarily give up their power. However, everything indicates that they have no alternative but to yield. These small fissures that develop do not show the Power’s willingness to establish dialogue, but they can be used by Cubans in the diaspora to pierce the wall that the Power has built between their nation and them.

Because, although neither the diaspora nor those of us who live in Cuba decide anything in Parliament — and in fact, not even Parliament decides, since everything is fixed from above by the autocracy — the diaspora can and should take the opportunity to legitimize itself, with an agenda of demands that, as Cubans, is their due.

For this the exiles have all the communication tools that the free world offers them and infinitely more opportunities than Cubans of the Island to publicly present their opinion about the juridical monstrocity that is a Constitutional project hatched behind the nation’s back in a council of 33 druids.

In contrast, “inside” Cubans do not have the ability to find out exactly what opinions prevailed between one community and another, between a block or study center or one workplace and another. The limited access to the web and the control over Internet networks hinder us from interacting properly, while the government press monopoly has the ability to manage and alterithe data to inform whatever reinforces their interests.

On the other hand, if a Cuban from the diaspora fills out the form of the Minrex (Cuban Ministry of Foreign Affairs website) with his demands, and then publishes that form on the networks just as he filled it out, the government will not be able to manipulate his opinion or ignore it without paying a political cost for it. There is no guarantee that the demands of the diaspora will be included in a supposed constitution that, in fact, any citizen with a minimum of democratic sense would reject; but it would be proof of the existence of a critical sector that would break the myth of the emigrants as an amorphous conglomeration of resentful, uprooted and hateful “non-Cubans”, which, for so many years the dictatorship has dedicated itself to divulge when it has considered it appropriate.

If the right to vote in the reform referendum from abroad were included among these demands, it would be a wonderful opportunity for all those of us who oppose the consecration of a single party and a failed political system to be united as endless destinies. That would indeed be a sign of political willpower and strength that the dictatorship will not allow, but, at the same time, to deny it would be evident.

It’s about having the plantation masters come for wool and to leave sheared, the only thing that needs to be done is to turn the trap they are setting against them. At least this is how a not-too-despicable sector of the diaspora and many of us who live inside island-prison see it.

At the end of the day there is nothing to lose and something to gain: a common resolve among Cubans from all over the world to break the silence and the gap. It seems too little, in view of how much they have taken and that we have allowed them to snatch from us. However, in the face of a regime like Cuba’s, no victory is small.

(Miriam Celaya, resident of Cuba, is currently on visit in the United States)