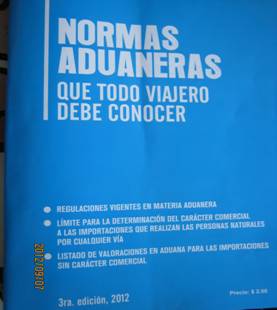 Faced with a failed economy that is unable to produce exportable goods that might bring hard currency into the country, the Cuban government has instead opted to export services at low cost. For this it makes use of professionals – doctors, teachers, athletic coaches – who receive no more than 30% of the total salary that countries contracting for their services pay to the Cuban government, which retains the remaining70%. It’s a great deal.

Other easy sources of hard currency are the payments that Cuban residents must make to Immigration in order to be able to travel overseas. These cost at least 455 convertible pesos* (CUC) per person and include fees for processing the passport, letter of invitation and exit permit. This does not, however, cover the inflated ticket price, the cost of the visa or the airport tax. To visit the country, Cubans living overseas must pay even more. Another great deal.

On September 3 of this year new customs regulations took effect which raise the tariff duties paid by travelers who are residents of Cuba, whether they be Cuban nationals or foreigners.** They stipulate that personal effects- whether for personal use or not – weighing less than 25 kilograms may be imported duty-free. Miscellaneous items weighing over 5 kilograms will be assessed an import duty at a rate of 10 non-convertible pesos (CUP) per kilogram.In total, up to 30 kilograms may be brought in duty-free.Items valued at less than 50.99 CUC are not subject to customs duties. Additionally, up to 10 kilograms of medicine may be imported duty-free, provided they are carried in separate luggage and are in their original packaging.

A duty will be levied onmiscellaneous items for personal or family useweighing up to 95 kilograms at the rate of 10 CUP per kilogram. The maximum total allowable duty on imported goods is 1,000 CUP, which includes the weight and value of miscellaneous items, the value of domestic electronics and other imported goods. A duty of 100% will be levied on items valued at 51.99 to 500.99 CUP, and a duty of 200% on items valued at 501 to 1,000 CUP. However, anyone assessed the maximum import tariff of 1,000 CUP must pay a total of 1,450 CUP to customs authorities.

Furthermore, levies on all shipments by air, sea, post or courier will be assessed in convertible pesos (CUC) up to a value of 200 CUC, based on a rate of 10 CUC per kilogram, with the first 30 CUC, or 3 kilograms, being duty free. Another great deal.

According to an untrue but tired and often-repeated old slogan, “Under socialism, the human being is what matters.” These days it should be, “Under Cuban Socialism, hard currency is what matters.”Pure dialectic materialism!

*The Cuban Convertible Peso (which is not, in fact, convertible into foreign currencies), is roughly pegged one-to-one to the U.S. dollar, but with fees added on one CUC is about $1.10 U.S.

**On September 5, 2012 the newspaper Granma published an article outlining the new rules:http://www.granma.cu/ingles/cuba-i/5sept-Aduana.html