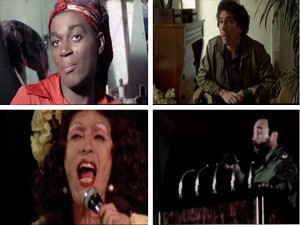 There are those who believe that history is written only by those in power, by means of textbooks, testimonials, biographies, means of communication and other supports of dominance that certify the version of the victors. Cuban history of the 20th Century confirms the rule, but in conflict with the story of the main characters who jump the fences of the socio-political angle.

In this parallel history is written the documentary “Improper Conduct“, from the Collection of Cuban Cinema Dador, conceived in the middle of the 1980s for the French channel Antena 2 by Margaret Memegoz and Barbet Schroedr under the direction of Nestor Almendros and Orlando Jiménez Leal, with script by Michel Dumoulin, montage by Michel Pion Mon and Alain Tortevoix, Dominique Merlin behind the cameras and Nicole Flipo as producer.

“Improper Conduct“, based on interviews of exiled Cubans in the cities of Europe and America, offers another view of the country at odds with the official history, recreated through testimonials, images of parades and statements of Fidel Castro about events unleashed by the group who seized power on the island and imposed a reign of terror. The work preserves freshness and a sense of the present, even though it is narrating facts from 1959 to 1980.

The title reuses the expression used by officials to justify the massive dragnets of the 1960s and 70s against hippies, homosexuals, and “those unadaptable to the revolutionary process”, victims of accusations and public ridicule in the neighborhoods, student and labor centers, who were sent to the Military Production Support Units (UMAP), tropical versions of the extermination camps created by the Nazis during the Second World War (1939-1945).

Having become a classic of our cinematography, “Improper Conduct” is a deluxe documentary for its photographic excellence, the montage of images, the panning of faces, the interaction between questions and responses, the self-assurance of the interviewees and unpedantic authenticity of their testimonials; in contrast with that expressed by F. Castro, who masks his intolerance and repression with reasons of state.

Predominant are the testimonies of artists, writers, and ex-functionaries submerged in the atmosphere of an era from the personal story of each. Personalities parade across the screen like Carlos Franqui, founder of Rebel Radio and ex-director of the magazine Revolution, Guillermo Cabrera Infante, creator of the weekly cultural Revolutionary Mondays, the poet Heberto Padilla, the narrator Reinaldo Arenas Fuentes, the theatric René Ariza, the ex-political prisoner Armando Valladares, and intellectuals such as Lorenzo Monreal, Jorge Lazo, José Mario, Rafael De Palet, Héctor Aldao, Mireya Robles, Juan Abreu, Elaine del Castillo, Susan Sontag, Ana María Simo and Martha Frayle, among others who probed that as of yet unexhausted fragment of national horror.

“Improper Conduct” evokes the “Night of the Three Ps” (taken from putas (whores), proxenetas (pimps), and “pájaros” (Johns)), collective humiliations and political and moral trials unleashed against relatives in places like the University of Havana and other teaching centers of the country, blacklists and assemblies of insults that took thousands of innocents to prison. Details about interrogations, absurd suspicions, the claims of hippies, homosexuals, whores, vagrants, and Jehovah’s Witnesses; the places of urban imprisonment; the buses with the blacked-out windows headed to the fields of Camagüey, with fences of electrified spikes, days working in the fields, mistreatment, hunger, and suicides.

Almost nothing escapes the sights of those who carry out this hell on earth. One shows drawings of the barracks, the punishment cells, and the wires. Another evokes the camp’s slogan: “Work makes you men” (Lenin), similar to “Work will set you free” (Hitler), posted at the entrance to Auschwitz.

The film reveals the vicious circle of persecution and persecuted and investigates why there was so much paranoia, especially the preoccupation of Raúl Castro and Ramiro Valdés concerning the gay problem; it recalls Raul’s trip to Bulgaria and Ramiro’s interview with the mayor of Shanghai (China), who told him how they killed them with poles in a traditional feast and threw them in the river as a lesson.

From the images and testimonies of “Improper Conduct” a new prostitution returns with the State as the pimp, tourism at the service of power, the granularity of control at the neighborhood level and the massive exodus from Mariel to Florida (22 April through 16 September 1980), a true plebiscite against governmental despotism.

To see this audiovisual fragment once more about a Cuba buried by repression, censorship and collective laziness, it is incumbent to ask ourselves “what were we doing when those things were going on?” or “What are we doing now with these horror stories? The why is indispensable to recover our memory, cleanse our wounds, and redesign the new nation.

(Translator’s note: This documentary, presented in 12 parts, can be seen on YouTube. It should not be missed.)