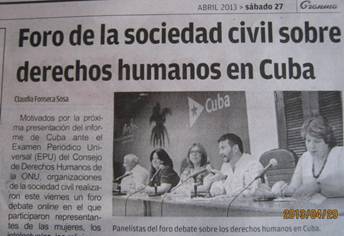 A few days ago the government organized a Online Discussion Forum for a generic Cuban civil society, about human rights in the country, with an eye on the upcoming report from the United Nations Human Rights Council: the Universal Periodic Review (UPR).

As expected, there was representation only of women, intellectuals, religious and Cuban artists who support the regime, and from pro-government organizations and government institutions such as the National Union of Jurists of Cuba, the Federation of Cuban Women, the Union of Writers and Artists of Cuba, the Council of Churches, the Martin Luther King Jr. Center, the Cuban Movement for Peace, the José Martí Cultural Society, the Council of Scientific Societies Health Solidarity Organization the Peoples of Asia, Africa and Latin America, among others.

It was all one voice (the choir syndrome), as if they had rehearsed repeatedly the same arguments already worn out on the marvelous Cuban political system, the democracy of our socialism, the focus on gender, racial equality, and the respect for sexual diversity, the blockade, terrorism, etc. It wasn’t worth spending a single dime on the carefully planned event, with totally known figures, lacking any originality and not bringing anything new.

I’ll touch on another aspect that stands out: the appropriation of certain terms which were previously considered taboo by the authorities and which had been dismissed from the official vocabulary, such as democracy, human rights, diversity, civil society, etc.; instead they used socialist democracy or our democracy, socialist rights, unity, dictatorship of the proletariat, and so on.

It seems that, with the passage of time and the accumulation of failures, both domestic and international, the latter lost credibility and validity, and have had to dip into what was once considered taboo, albeit properly recycled ideologically. Thus we see that by using the term democracy, the authorities say ours is the most perfect and best there is on the planet; the only human rights defensible are those officially accepted; diversity refers only to gender, race and sex, excluding the political; and civil society consists only of those who share the system’s ideology.

The attachment to the politically archaic, outdated and outmoded is so entrenched, that to leave it behind seems an impossible task for the authorities, despite the updates, experiments and other adjustments, designed for their survival.

Meanwhile Cubans, whatever they think, are not part of the terms in use, and this trying to monopolize them by the government, without understanding, accepting and respecting diversity as an indispensable component of the unit, will continue to block the paths for the solution our national crisis.