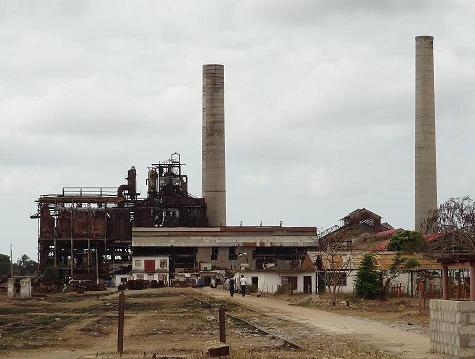 Fifteen kilometers to the south of Ciego de Ávila, in the center of Cuba, there is another failed town, the outbuildings of the demolished central Stewart, that today is called Venezuela. One more ruin.

Venezuela was once a thriving town. More than 7500 workers earning their bread and some constant progress in a sugar refinery that became the third in production capacity in the whole country. One million sacks of sugar produced in 1952. Big old wood houses that still exists, though leaning a bit and unpainted. A Union capable of hard battles for their workers’ progress, without limits, even against governments or companies, as it should be. Hundreds of residents members of different political parties, lodges, religions, cultural societies, choosing to buy amid different newspapers or crowds of commercial brands.

All that was reduced to One. And often to Zero.

Only one union trained to tell their workers that they must continue working in silence even if the receive less each time; one school where the boys learn a bunch of things that won’t give them any prosperity after graduation if they stay in that town or country. Very little to eat in the street, the farmers market selling very tiny potatoes, some bananas and malangas (a tuber resembling sweet potatoes),amid very fertile soil.

A fish market of chopped fish 30 kilometers from the Júcaro port. A boring museum with the stuff of Indians, Cuban independence warriors, union workers and bourgeois that soon will be another office in this poorly preserved town-museum. The headquarters of the Union that used to give battles against the masters in the republic, demolished.

Huge billboards with Fidel Castro and Hugo Chávez announcing a future that neither they nor their followers will be able to give to their people. Eternal silences in the nights. And the refinery, that majestic mass of human labor, that factory that 60 years ago exceeded the million sacks of sugar, became a silent ruin.

And that is only the visible part. There isn’t freedom, which is not easily measurable, because people get used to silencing their wishes of progress to avoid jail or being fired from jobs, they get used to the same newspaper, radio and television; to the same politicians, to the same useless currency. They adapted themselves to thinking about running away, very far, without home or family when they can’t take it any more: that custom is the worst thing that happened to Stewart, to Venezuela.

This is Venezuela’s mute drama. That could happen to the other Venezuela, if they don’t learn the lesson of others and vote badly or remain silence in these decisive days, in which I forget that stupidity of not meddling in the problems of people of different flags; between the solidarity for other men, and respect for the very dubious sovereignty made to protect bad governments, I choose solidarity. And I also believe, as did José Martí and Bolivar — liberator of foreign lands — that homeland is humanity.

And Venezuela pains me.