I have the excuse of two children so I can play outside. At home I say I’m going with them to please them and keep a close watch over them, the reality is that I escape, in this way, the tensions and the routine, or it might be, the idiotic world. Sometimes we just go out in the sun and kick a ball around. If it’s raining, we make goals in the street, with two stones on each side, and carry on like we’re in a swimming pool. But on the weekends, because school is out, we aspire to drastic solutions, one in particular: we take the road out of town. This we call “The excursion.” Usually then we add some boy from neighborhood, sometimes three or four if their parents give permission.

Clearly within the city there aren’t that many choices, nor within the family budget, to go looking for better options in other cities or resorts. However, we don’t think about that, we simply enjoy what we do. Riding bikes, in fifteen or twenty minutes we’ve “changed the channel” and are enjoying another landscape on our big screen. Instead of the chipped and stained colors of the houses, out there it is predominantly green, strongly speckled with flowers or chopped by the sharp gray of the rain, depending on the season.

We go looking for surprises. So we avoid the pastures which are almost always empty with their fences separating us from a slightly tentative plain. It’s more exciting for us to suddenly get visual pleasure, or that of the other senses, touch, smell and taste. We go after any dazzling fruit.

We get up to the most amazing things. Children are, of course, those who take on the most. I’ve brought only a knife, a pair of containers with water and little else. But Fredo de Jesus, for example, wants to live in a country where animals talk, where they filmed Alvin and the Chipmunks making it on the music scene, so he still has the ability to hear or believe that he listens to talk to animals when they are, or believe they are, alone. Perhaps a bird that has migrated from there… He also wants to be like Legolas, the elf from The Lord of the Rings and also use, to perfection, the bow.

Francito, like the magician Merlin, wants to invoke the spirit of fire with a spell and nothing else, putting the palms of his hands to make a flame rise from the ground. His cousin, Enmanuel, older and without whom they can’t imagine a happy day, says, “the fire is beautiful.”

Fredo asks me if the shops don’t sell torches, and is this the time, when his mother isn’t watching, to make one. We share out trees and crannies in usufruct, between good and evil, pure and simple: everyone is good and has the right to believe that the others are ogres, trolls who must be expelled from the forest. We ride with care not to get a puncture. Francito makes the observation that in the paradise landscapes of movies you never see the spines, nor the ants, nor the tiny ticks!

Coincidentally, they all plan to graduate some day as explorers or conservationists. They collect amazements while I give a score on a scale of one to five. Almond shrubs in a sea of marabou weed and West Indian elms; Three points. Rundown bull without horns: four. Giant centipede — any creature whose capture is effected without the use of a cap earns extra points — maximum score. Mashing and eating almonds by the ton ends up being our version of the coming of the dinosaurs to the green valley after the great cataclysm.

I let them talk when they get tired. This is the part where they share their experiences. Above all I keep quiet while it seems they cross the forest of social reality or rub against the dangerous edges. I learn. In particular I learn about the innocence that I would like to preserve even at the cost of my life, if it were possible. Today they travel the world freely and return.

Fredo offers his point of view: the dream consists of a great solution to all constraints. In dreams he has the freedom to be and do whatever he pleases. He says that when he wants to have adventures like Harry Potter, he uses his powers, the dream, and there you are. They agreed, but another notes that the ideal is to be able to leave, to earn money and get all the things necessary to live.

I remember a friend, a poet who spoke of the country as if it were a landscape that one passed through on the way to exile: the day you left you could come to visit, you could know it. They are happy to live in a healthy country, where there are no poisonous animals, where boa constrictors don’t swallow people, nor lions, nor crocodiles as in the Florida swamps and in Australia…

I think about what happiness is theirs, ignoring other environments which also grow at the expense of imagination and the Utopias, the literary the worst of all, and the morbid politics. My deepest desire unconfessed: that they not grow up. That they be good men, too. But that they walk among the snares of the world with firm step and not fall into the fallacy of being “useful to society,” where many end up turned into efficient deplorable instruments, those who become the long tentacles of injustice, like the opportunists, sycophants, snitches, bootlickers, always crawling under the dark cloud of power. That they avoid being poisoned by jealousy and the fear of living openly. That they never abuse, corner or humiliate another human being.

To Francito the argument of a harmless endemic fauna is especially appealing, as he is one of the few children who has been bitten by a Santa Maria Cuban boa, the almost extinct Cuban cousin of the viper that has a reputation for stupidity. (See photo above.)

It wasn’t too stupid, or it was tired, the sad specimen they use at the Cayo Coco resort for the visitors to take pictures, he took him out of a suitcase and even hung him around his neck. I insisted that he, ten at the time, not be left without an Indiana Jones souvenir, with such bad aim that, in the fraction of a second it took me to turn on my camera, the boa decided to attack. Fortunately — as the doctor on duty at the hospital explained, there was no poison — but he refused to believe it. The photo, along with my regrets, would bring the victim an unexpected popularity among his friends in the neighborhood and at school. 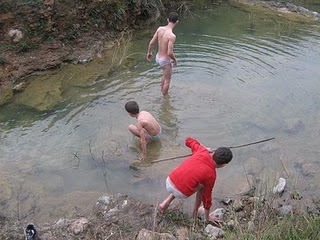 “Watch out! How scary!” they exclaim running their eyes over the bushes. By now we’re at a natural pool in the bed of what was once a stream and should have become a canal according the Utopian agendas and absurdities of the bureaucracy, but they still don’t know that. Water collected since the last downpour remains among the stones.

They go swimming. Fear ties me to the rock from which I watch them. Splashing and laughing. What amuses them most is fleeing from a crocodile or an imaginary boa.