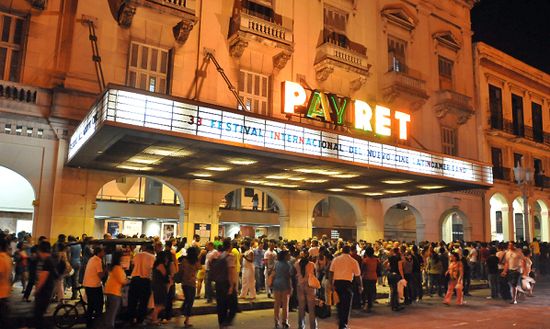 In Havana you can get a hooker to make a house-call for 20 convertible pesos. Illegal “cable” antennas for a monthly fee of 10 CUC. Pirated internet connections for 2 CUC an hour. And illegal copies of soap operas, mini-series and movies, especially those from the United States, are on the rise.

There are houses where on weekends spectacular dance parties with enormous plasma screens and techno music take place. They charge a 10 peso entrance fee in hard currency. If you like sports, for 25 pesos you can go to certain homes whose residents have converted their living rooms into actual mini-stadiums. Between swigs of run, you can watch the Atlético-Real Madrid match.

At the moment the local Cuban video game market is also on the rise. Of course it does not have the power and scope of foreign companies which in 2011 alone earned 74 billion dollars worldwide through non-stop distribution of cinematic quality productions.

It is almost all illegal, but Cubans do it by cobbling together a minimal infrastructure. Using pre-historic access to the internet and obsolete technologies, they have created a fledgling entertainment industry. Why do they do it? To provide distractions for their stressed-out loved ones, neighbors and friends, who spend most of their time looking for food.

Pirated disks with the latest editions of video games can now be purchased at private stalls which also offer CDs and DVDs of movies and music videos. If you so desire, you can also call a guy who knows about information technology.

The man will arrive at your house with an external hard drive and a long list of games for sale. The prices range from one to two convertible pesos, depending on how recent they are. Within a few minutes he will install SIM 4 or FIFA Player 2012 on your computer. There are also experts at “cracking” Xbox, Nintendo Wii and Sony PlayStation in order to read their disks. In case anything breaks down, there are no state-owned shops which repair video games, but there are any number of private shops that will do this work.

If you do not have relatives on the other side of the pond who can send you sophisticated video games, you can buy them on Havana’s black market, but you will need a fat wallet. If it is a new PlayStation 2 still in its box, you will spend between 100 and 120 convertible pesos. A used one will cost perhaps 40 convertible pesos.

Prices for recent versions of PlayStation, Xbox and Nintendo vary between 300 and 400 convertible pesos. Video games are not for sale in hard currency stores. Some owners will rent them for 20 pesos an hour. And, believe me, there are plenty of customers. Everyone in the neighborhood with gather in someone’s living room to play violent video games in which blood and mayhem abound.

Many parents will gladly pay these prices to keep their adolescent children entertained with video games and off the street corner, a place synonymous with bottles of rum and Parkisonil* pills.

Sometimes the entire family gets in on the act. After 7PM the Gonzalezes and their eight- and eleven-year-old sons plug a video game into their 32 inch plasma screen TV and keep playing until 9PM, the time when the soap operas start.

“I made the investment (of buying the video game) as a way of being together during the dead hours of Cuban television when they usually broadcast reruns or those suffocating round table talk shows. It’s true we don’t realize it most of the time, but playing the game is more interesting,” says Roberto Gonzalez.

Faced with a bleak future and a hard life which produces waves of anxiety and hopelessness, people prefer to take refuge behind a joystick. And it is not only the young who take pleasure in video games.

Just ask Juana, a 68-year-old housewife. She often sits for up to ten hours in front of a computer, and any number of times has left the beans to burn after becoming absorbed in the search for clues in a detective game.

Photo fromdiario ecuatoriano Hoy. Havanans also like going to the movies, especially in December when the city hosts the International Festival of New Latin American Cinema, as it has done for the past 34 years.

*Translator’s note: Also known as trihexyphenidyl, it is a drug used in the treatment of Parkinson’s disease and to treat the sides effects of anti-psychotic therapies. In recent years it has become an illicit recreational drug in Cuba. Untreated overdoses can be fatal, especially in children.