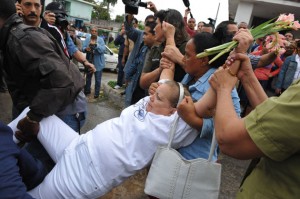 More than one year ago, the daily newspaper El Mundo asked me to chronicle the Ladies in White. With their street protests, the women headed by Laura Pollán, gladiolas in hand, were cornering the regime.

In February 2010, after a hunger strike of 86 days, the political prisoner Orlando Zapata Tamayo died. Each week, the Ladies in White began to walk through different neighbourhoods of Havana. Their walks usually culminated in a mass inside a church to the cry of Zapata Lives.

That March day, after four in the afternoon, I arrived at the house of Laura Pollán, No. 963 Neptune St., in the central plain of the capital. Pollán was the wife of the prisoner of conscience Héctor Maseda,one of the 75 peaceful dissidents incarcerated the government of Fidel Castro in the spring of 2003 and released in February of this year.

Laura’s small, stuffy living room was full. “Today we have prepared a march”, Laura told me, in a low voice. Where?, I asked her. “I only reveal the destination once we are marching”, she answered.

That was the only security measure that they used so that the political police would not cut short the planned walks. “We know that they have control of the telephones and it’s possible that they have an agent close to the group; it’s a rule that we use and it has worked”, Pollán confessed to me in the middle of the bustle in the confined kitchen while she prepared tea and coffee for the ladies that chatted and laughed, waiting for zero hour.

Laura was spokesperson and leader of the Ladies in White, European Parliament Sakharov Prize recipients in 2005. That afternoon, more than 70 women, between relatives of the prisoners and a group supporters, prepared themselves to march under the barrage of insults and karate blows of ’supposedly indignant’ Castro loyalists.

None of these ladies had a history of anti-government activities. Almost none were dissident. Some of them worked in offices, workshops or factories as well as in the home. And like all Cuban women, the principal headache, was to bring two hot meals to the table each day and look after their family.

If anyone pushed them along the path of public protest it was the regime of the Castro Brothers.And they didn’t regret it. Behind bars they had sons, fathers, brothers, husbands… “We are not going to stop until they free all of the political prisoners”, said Laura Pollán, a somewhat overweight, blonde, soft spoken woman of small stature.

In the house, before leaving, the spy who came from the Isle of Pines, Carlos Serpa Maceira, was doing interviews, taking photos and seeking to attract attention with out-of-place declarations.

So, Maceira was the “reporter” covering the activities of the Ladies in White. The special services had Pollán monitored at all times. With Maceira style agents, tapping telephones or intrusive wide-angle cameras placed outside her house.

The women no more go out into the street, than the State Security officials in plain clothes call on the workers from a nearby workplace in a heartbeat and two public buses bring nearly a hundred police.

The supposed ’spontaneity’ of the people offended by the march of the Ladies in White is nothing of the sort. For the activists of the Communist Party and its Youth wing, from the shops and businesses near Laura Pollan’s house, they are mobilized immediately. Also the ETECSA employees at Aguila and Dragones streets. And of course, you can’t miss them, the irate grandpas from the combatants association.

Verbal lynchings and beatings are documented with pictures and videos on many websites. The sad part of this harassment is that certain journalists and official bloggers make light of this campaign of intimidation.

Days before Saturday, September 24, one of them launched the Twitter tag #hoynosalen. That morning, he went so far as to incite mass murder with songs like, “we have a few machetes” or “ready, aim, fire.”

Law students attending the University of Havana participate in the revolutionary party. Young people who do not stop to think that many of these women had the age of their grandmothers, like Laura, 63.

Twenty days after the brutal assault, Laura Pollan died in a Havana hospital. I am one of those who thinks that her body must have been affected by the continued stress and humiliation to which this courageous woman was subjected for eight years.

If they have anything left of humanism and dignity, her assailants owe a public apology to the family of Laura Pollan Toledo. Otherwise, mission accomplished.