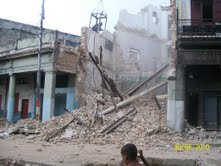 For Rogelio, 49, the need for housing is stronger than his fear of losing his life due to a collapse. Born in Guantanamo, and he has nine years in Havana. For twelve hours a day, he frantically pedals a rickshaw under a blazing sun. He lives in one of the more than 6 thousand tenements — called “solares” in Spanish — in the capital.

Fifteen years ago, his quarters were declared uninhabitable by the authorities. The danger of collapse is real. Let’s visit the site where he resides. At the entrance, some high wooden braces barely support the crumbling structure. Between screams, reggaeton music blaring, tenants who play the lottery, chat about baseball, politics and women or simply do nothing, he spends his hours in the place.

Rogelio’s minimum room leaks when it rains. A steel bar bisects the room to prevent the collapse of the miserable hovel of concrete and gray tiles.

Not to mention the precarious living conditions. Bathing facilities, toilets and broken pipes cause a foul smell. That matters little to Rogelio.

“I have no options. I burned all my ships. I lived in a hut with a thatched roof and no future hidden location known as Happiness in Yateras. One evening I packed my bags and two thousand dollars I had saved by selling homemade rum, came to the capital. Havana is our Miami for many from the East. And a step that can be used to catapult yourself and migrate,” says Rogelio while his wife rubs ointment on his legs, trying to ease the pain after twelve hours of pedaling.

Official figures are terrifying. In a population of 11.2 million, the housing deficit is 600,000 homes and state plans for construction decreased from 150,000 to 50,000 or less per year. It is estimated that 60% of homes in Cuba are in fair or poor technical condition; of these at least 20% would be uninhabitable.

In the old and central Havana the number of dilapidated buildings increases. Julia, 56, selling pirated CDs as usual, knows the risk to the resident in an old building within walking distance of the Capitol. “But if we leave, we will end up in one of those overcrowded government shelters, which are the closest thing to a prison. Sketchy people living there and sometimes violent disputes resolved by dint of knife,” says Julia.

A collapse occurred on January 17, in a uninhabitable building, at Infanta and Salud, Central Havana, killing four young people: Yexnis Mejías Muñoz, Daniela Fleites Marchante and Rachel Labrada Mesa, the three college students, and Jorge Osvaldo Gómez González, the boyfriend of one of them. It was hidden under a heavy police deployment. The event has generated intense debate among the population, both among those waiting in lines and standing on corners as well as within the ’almendrones’ or old American cars, converted into private taxis.

Most people believe the government should take urgent measures to prevent the repeated collapses that continue to occur in several municipalities of Havana, with their costs in deaths, injuries and property damage. A medium intensity rain shower usually causes the collapse of houses and buildings in Havana.

Not to mention when the Cuban capital is shaken by the fierce winds of a hurricane. Fortunately, none have been force 5. Due to the hurricanes that hit the island in 2008, more than 647,110 houses were affected in the country, and 84,737 collapsed. In Havana, thousands of families lost their homes and many are still without them.

The prayers and charms of the babalao Gregory, 62, do not seem sufficient for the next hurricane season; adverse weather conditions erased at a stroke hundreds of buildings that still stand only due to a miracle.

So people like Rogelio from Guantanamo, or the vendor Gladys, have to sleep with a heavy heart fearing a possible collapse of their homes.

The worst thing is that the government of General Raúl Castro does not have at hand a solution to urgently rehabilitate and reform the city. Havana will have to keep waiting.

Photo: Joisy Garcia Martinez. Of a building collapse that occurred on June 29, 2010 at the intersection of 10 de Octubre and Luyano, better known as Toyo corner. Taken from his blog Creole Liberal.

Note. – On 26 January, just days after writing this work, there was a second landslide in Havana, with one fatality. After decades in ruins, the Campoamor Theatre collapsed, located as San Jose and Industria, on the side of the Capitol and one of the most important theaters in Cuba in the twentieth century.