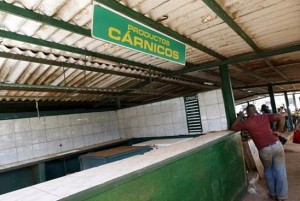 The flowers of the flamboyant on Havana’s Santa Catalina Avenue already began to change color. Majestic, shedding its flowers of yellow, orange and red forming a carpet on the sidewalks.

People do not stop to see the wonderful spectacle of nature. They are not into that. They walk with their heads down crates and bags in search of their daily food.

They bend to the task, the daily putting of two meals on the table. It is true that spring makes Havana good looking. The bright sun and cloudless sky hides as it can, the spoilage, filth and ugliness of a city that refuses, despite government apathy, to lose its charm, a city flirty and different.

Indeed, while the spring season is upon us. There was barely winter here in 2012. A few days cool and pleasant, no need to take out the old coats and able to share the evening with friends and compadres.

But for most in the capital it’s not about drinking a pitcher of beer in a bar in Santa Catalina and watching the festival of flowers and colors. Or sitting on the wall of the pier to watch the sunset. Even lovers of poetry.

That is, the thing is hot. Right now, the pork, the perennial highlight for a large segment of Cubans, is disappearing in combat and prices are skyrocketing.

In the Diez de Octobre and Santa Catalina market, for a pound of pork steak, thin, almost transparent, you must pay 40 pesos. For the shoulder 35, the same as the spine. Loaded with fat and bones, you have to watch the butchers, they will cheat you shamelessly on the weight. And hurry to buy, because at noon the stands are empty.

In the state markets the prices are cheaper. But for a couple of months due to shortages, the employees kill time playing cards or drinking poor quality rum.

Some 70% less. And to argue the reasons for the shortage they hide behind a bunch of excuses, from bad workers, higher feed prices in the international market, to the Yankee embargo that, as always, is to blame for the bare shelves.

No wonder the news and newspapers on the island are classified as science-fiction genre. Many buy the newspapers to wrap their trash or to use as a substitute for toilet paper. In the best case, to see the baseball results or take a look at the TV schedule.

Ordinary people are suffering the absence and higher prices for pork. Even smoked meats like ham or the loin are also scarce.

The pig has become the main meal for the Cuban family. In any variation: fried, broiled, fricassee with rice, tamales, chili sauce … also their entrails, feet, head and, of course, the skin.

Along with chicken, the protein is often the most handy for Cubans. Beef is a real treat. A pound cost 2.50 convertible pesos, when available in the underground market.

Good quality fish is in the sea or in the refrigerators of the mandarins. And there are not many pockets that can pay the excessive prices. Remember that on average Cuban earns a salary of $20 per month.

Therefore, companies and construction sites are an embryonic black market. In Cuba, whoever doesn’t “invent” (steal) in their job, it is because they receive remittances, he is an idealist or a fool.

Increasingly, many Havana families find it difficult to put a decent meal on the table. Ask Reinaldo, 37, a school teacher, the days are rare when he can fix rice, tomatoes and a piece of pork or chicken thighs.

“I do not receive even a dollar in remittances. I have to find a way to get money. From burning bootleg CDs to selling to my students tests, 5 convertible pesos each. The money is lost,” says the professor.

This lack of money has led to rumors that the “chavito” (the convertible peso or CUC), could fall from 24 to 16 Cuban pesos for one. “That is what people are saying, but no precise date is known,” says the cashier of a CADECA (official exchange house).

The issue of food is a national headache. It takes about 90% of the money that a family receives. And so everyone may not always eat decently.

And it is not only pork where the prices are scandalous. A pound of tomatoes costs between 6 and 7 pesos a pound. In the Sevillano neighborhood, a street vendor sells lemons for 20 pesos a pound. And in the neighborhood they grab them because the lemons are also gone.

“It’s crazy,” says Josefa a retiree receives 193 pesos a month. For people like her, the sight of Santa Catalina flamboyant dropping its flowers in the road means nothing.

His concern is getting food. And this spring, that is a problem.

Photo taken from “Cuba Out”