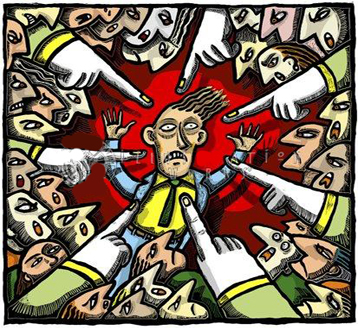 Humberto Gonzales Otaño 56 years old, a jeweler in San Miguel, died violently on the morning of September 14, 2010. Two men entered his home while he and his wife slept.

On 28 November the Court of Havana tried six “marginals” from Mantilla, one of the poorest neighborhoods of Havana, accused of organizing and executing the murder of Tarzan, Goldsmith’s nickname.

The hearing begins. The Court, the prosecution and defense lawyers take as a given the findings of the case, as if all present were aware of what happened the night they killed the jeweler.

All except Valerino Acosta acknowledged planning a robbery at the home of the victim, on at least one occasion. They gave up because the dogs there and at the neighbor’s house were barking loudly, the prosecutor said in his indictment.

The night of the murder González Otaño’s wife fed the dog, but there was no barking. Nobody knows what happened to the dogs. Neither the court nor the defense counsel were curious. They discuss the documentary evidence. Most of them consist of the defendants’ criminal records.

The prosecutor says that none of the defendants study or work, they associate with antisocial elements, disrespect the rules of social coexistence, are bullies, disturb the peace, use obscenities, have been investigated by the Ministry of the Interior, and do not participate in the activities of mass organizations, despite belonging to them.

“Pompi” speaks, as Pedro Valerino Acosta, 29, is also called. According to his version, he gave Daniel and Ramon a contact to a jeweler in San Miguel, who sold clothes and exchanged U.S. dollars for convertible pesos.

Police say all proposed to rob the place and the prosecutor asked for 18 years imprisonment for murder and 15 for robbery with violence and intimidation of people.

Tarzan, the man considered the best paid in gold in Havana, was described as an elderly person, a fat, sick millionaire. Pompi visited his home with Eduardo Sierra, one of the witnesses who testified at that trial. Nobody questioned the investigator/interrogator on the case, Captain Yoelkis Cespedes Ramos, because this person was dismissed as a suspect, as he knew most of the defendants.

Galindo Madan and Limonta Rojas, both 27 years old, did not participate in the crime, but were with Daniel and Ramon one of the times they tried to burgle Tarzan’s house. The prosecution claims that they were the organizers of the plan and for Limonta Rojas, known as the “Black”, they asked for a penalty of 20 years imprisonment for the murder and 15 for theft.

The wife of the victim, after police inspected the site, found a flashlight on the bed among some clothing. She recalled that when they robbed in her home she suddenly was woken up by blows to the face. A man sitting astride her illuminated her face and threatened her with a knife. She gave the flashlight to a man named Luisito to make it available to the investigators of the case.

The expert specialist in “odorology” found a smelly print on the flashlight. Samples coincided with the odor of Juan Enrique Galindo Madan. For him, the prosecution called for a penalty of 22 years in prison for the murder and 15 for theft. No one asked how they obtained positive results for “Pica,” Galindo Madan’s nickname, if prior to the analysis the flashlight was handled by several people.

Leonardo Rodriguez, 49, Daniel, 29, and Ramon, 40, allegedly carried out the attack. Mrs. Fernandez and her neighbor told the court there were two attackers but they did not recognize anyone. Police say they entered the house through the bathroom window. They didn’t see Leonardo because he kept watch. For them, the prosecution asked for 25, 30 and 27 years imprisonment respectively on charges of murder and 15 for the crime of theft

The witnesses begin to testify. The victim’s wife enters the room nervously. Mrs. Esther Fernandez Almeida, 60, received permission from the Cuban authorities to leave the country in March, despite being a key witness in the case. She returned home and testified at the trial. No one asked about her trip outside the island.

She told the panel how she pushed away the weapon her assailant was threatening her with, injuring both her hands. Unexpectedly, she said that she fainted after being hit by the attacker. The prosecutor says in his charge that she saw them beat her husband, even though she was blindfolded and the room lights were off. No one asked how long she was unconscious.

Fernández Almeida told the police she had been married to Humberto more than 40 years and they had two children together. Before the judges’ panel she said it was 20 years. In another statement she confessed they married in 1970, when he was 16 and she 19, and they divorced in 2003. In 2008, they remarried. Nobody asked the investigator in the case why she was dismissed as a suspect.

Tarzan’s wife recounts how her husband, with a punch, toppled the the suspect looming over him. His heaviness prevented him from sitting up. She ended up on the floor when the one on top of her leaped up, with the knife in hand. And in the fall she broke the glass on the night table. Miraculously, none of the attackers was injured. All the blood and fingerprints in the crime scene belonged to the victims.

The prosecutor stated in his indictment that “Cundo”, a nickname for Jesus Daniel, and “Bobo”, a nickname for Ramon, pressed strongly on the neck of their victim, after hitting him with an iron. Tarzan told them that the money was in the kitchen. Captain William Sourt Guilarte, the crime expert who participated in the collection of evidence, testifies. He could not explain to the defense why there were no traces of prints there.

Ms. Fernandez Almeida said she heard the aggressor who threatened her husband say, “Saul, do I kill him?” to make him to tell where the money was. She told the court that seven months after the murder she took part in a test and recognized the voice of “Bobo” and that of “Narra,” as Leonardo Rodriguez is known.

Esther recalled her husband asking the attackers not to place tape on his mouth because he could not breathe and they tied him by the feet. Tarzan confessed that he kept his money under the mattress. The attackers fled the scene, with jewels having a value, according to the prosecution, of 206,193 Cuban pesos, though none were recovered.

Humberto Gonzales Otaño died from the injuries caused by his assailants, says the prosecution. Forensic Medicine certified the direct cause of death as mechanical asphyxia by suffocation caused by pressing on the neck and blocking the orifices.

His wife said she moved the 5 foot 7 inch, 440 pound jeweler to be able to give him two pills. The neighbors also affirmed they saw him alive, but they weren’t permitted to rescue him. Including one who described him as in a state of shock.

The forensic experts did not attend the trial. We will never know how the Mr. Gonzalez Otaño, after a fracture of the thyroid cartilage (Adam’s apple) swallowed two tablets or spoke to refuse breaking down the doors to help him as his wife said. Those present did not know whether his death was prolonged and immediate.

The assailants wore gloves. However, four odorous traces found were positive for “Cundo” and “Bobo”. The results were also positive for a person who was not charged, named Ariel Cruz Hernandez. The detail is not mentioned at trial.

In the audience participating as a witness is a forensic expert in the specialty of “odorology.” He says the smell of a person is unique and could be impregnated in objects, even wearing gloves. “The objects touched by the aggressors are introduced into a sealed nylon bag to preserve the odors,” he explains to the panel.

“Afterward they are compared with fragrant impressions from suspects, using a canine technician,” he says. The young man says that a trace of smell is as reliable as DNA. No defense attorney objects.

In the inspection of the crime scene traces of odor arose in two of the four pieces of rope used to tie up the victims. No one asked why the odors of Gonzales Otaño and his wife were not on the ropes they were tied with.

The court and the parties commented on the other two witnesses requested by the defense, who were not presented at trial. Advocates continue with their reports. One of them asks for immediate acquittal of all defendants. The audience, mostly relatives of the accused, applauds. In a fit of hysteria, the president of the First Chamber of the former Court of Havana expels all of them without any warning.

In a single session of about five hours, they discussed the evidence for the prosecution. It became clear that the defendants intended to steal. An intention that according to Cuban criminal law is not punishable, when the subject brings the matter to the attention of the authorities.

“Easier said than done goes a long way and there is no evidence that incriminates,” anyone would say. But Pedro, Jesús Daniel, Leonardo, Ramón, Leonardo Wiliam and Juan Enrique, know what the outcome will be. The trial was conclusive for sentencing. There is no doubt that the court by conviction will declare them guilty.