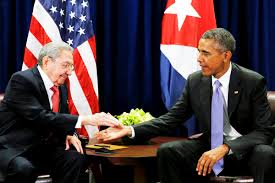 Regina Coyula, 20 October 2016 — It is said that the choice of the word “embargo” or “blockade” to define the US policy toward Cuba, clarifies the position of the speaker-writer. Those who speak of the “blockade” are not better Cubans than those who call it the “embargo” (although they believe themselves to be). It is a policy that doesn’t depend on Cubans; not even the international community can eliminate it.

A goodwill gesture on the part of my leaders would be the elimination of the internal blockade to which we are subjected, in the name of the country and the imperialist threat. Clearly, although this policy toward Cuba has been dismantled little by little, it is there and we will have to wait for the goodwill of the American government for its total disappearance.

“The international community has denounced the US embargo because it violates international law, and also for moral, political and economic reasons.”

The Cuban citizen has become accustomed to hearing only about the damage the blockade  has caused and continues to cause in our economy and society; this citizen ignores in many cases the origin of these measures versus those taken in response to it, but above all, it serves as a smokescreen for domestic disaster resulting from a willful and failed policy. Neither the US blockade nor the one caused by our government have affected even for one second the life of our leaders.