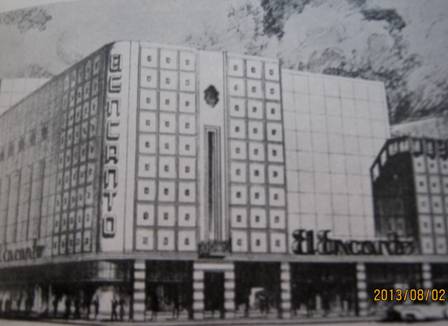 These days the term “going shopping” has fallen into complete disuse. Now it is better to say you are “going looking.” This stopped being a pleasant task many years ago. Just having to confront the reality of an almost non-existent public transport system and the high summer temperatures are enough to make you think twice. Nevertheless, yesterday I went with my friend to “make the rounds,” as we say here, in hopes of finding a faucet that would fit within her tight budget. On this occasion we went to the stores in Central Havana.

For more than thirty years I have refused to visit these old retail establishments, which previously had been the most famous in the city. I remember that before 1959 the intersection of Galiano Street and San Rafael Street was called “the corner of sin” because it served as a place of temptation for men. They went there to watch the parade of beautiful, well-dressed women who often went shopping in this area as well as to enjoy the sight of the lovely, well-groomed employees who worked at its stores.

I went with my friend as an act of solidarity since I had resigned never again to frequent these places. The first big shock came when I entered a store called Transval, the former Ten Cent, which still holds lovely memories for me. We found ourselves going through the unpleasant and unavoidable experience of having to leave our purses in a cubicle after first removing everything of value — wallets, cell phones, glasses, keys, etc. — which we then had to awkwardly carry in our hands since, according to a store sign, they would not be held responsible for items missing from purses in their custody. In other words, not only were we at the mercy of the very people who would rob us, but we also had to turn over our ID cards to them as a guarantee, something that is prohibited by the Ministry of the Interior.

For me entering Transval had a brutal impact. Of the formerly comfortable, pleasant and well-stocked Ten Cent, the only things that remained were the building’s structure, the beautiful granite floors inside and out, and the granite staircases, which were unbelievably well-preserved. We immediately went to the hardware department, but the prices posted there were, practically speaking, out of reach, so we continued our painstaking search until finally, at the least likely place, we found a faucet my friend could afford, for sale in CUC of course. From there we went to La Casa Quintana — the old jeweler whose beautiful logo still hangs above the entry — which is now the lamp department of the above-mentioned store. We later went to El Bazar Inglés, a dark, sweltering place which displays and sells very unattractive items made by local factories and priced in Cuban pesos.

We then headed towards La Epoca. Our visit there was exhausting. We went to every department even though we knew we were not going to buy anything. My friend just wanted to see what was available so she could later buy clothes and shoes for her husband and son when she had the money. This meant I had to go up and down an endless number of stairs — not only here but in the other stores we visited as well — since there were almost no working escalators, even in the stores that had them.

As we were leaving, I noticed Fe del Valle park, a site where El Encanto, the most emblematic and beautiful store in the city of Havana, had been located. I could not help but think that its tragic demise in a fire* may have been the best possible outcome for an establishment which was a storied example of Cuban culture and elegance. At least it disappeared at the height of its splendor and did not end up like its neighbors — Flogar, Fin de Siglo and La Época to mention but a few — which have become sad caricatures of their former selves.

*Translator’s note: El Encanto, Havana’s most elegant department store, burned down on April 13, 1961, the eve of the Bay of Pig’s invasion. An employee later confessed to setting the fire, which killed an employee, Fe del Valle. The site was later turned into a park, named in memory of the deceased.