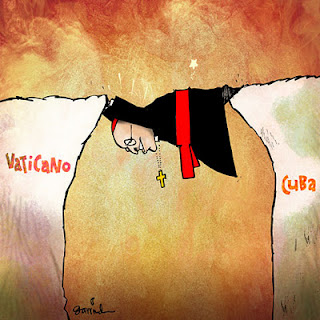 I had no desire to write, I have no desire to move. I try to be inactive and I doze off listening to music. If I start to read, the book soon falls out of my hands. I have hypothyroidism, a condition I know as I had my thyroid removed many years ago, but even at the height of the Special Period I did not lack the medicine that takes the place of the functioning of that gland.

Although it is a drug regulated through a card that I submit every month at the pharmacy, which is renewed annually in January, as of this January “it hasn’t come to us,” “there is a shortage,” to put it in the sweet bureaucratic language of the friendly employees of the pharmacy are purposely infected with.

With this feeling of imminent death, I follow the ins and outs of the papal visit through a cloud. Personally it neither affects me nor benefits me, quite the contrary. If the Polish John Paul didn’t manage to open Cuba to the world, what can I expect from this gray and technocratic Pope, in a place where charisma generates high returns.

And now with the end of this lying winter, and with the papal luggage just about packed to travel to the Caribbean, a small group of dissidents has put the church in a bad way, and so, in passing, the government. Or the other way around.

What are they asking for? The News that “informs me” saw no need to go beyond reading the Archbishop’s declaration about the group which has been in La Cardiad Church since Wednesday. That statement reflects disgust for the political use of a temple by this group.

The Church is a little confused, because this group of people did not introduce politics into the temple. A political act was to offer a mass for the health of Fidel Castro, who as far as I know is neither Catholic nor even believes in God and was excommunicated years ago.

That mass was not Christian piety humbly and silently praying for a wayward soul. There is media coverage for the record. And also for the record, despite the fact that I consider the Cuban church hierarchy timid and bland, it seems to be the only institution able to avoid a social catastrophe when the time comes.

The happy faithful will gather at the monument to Marti to hear mass. Many years ago I used up my quota of attendance at this soulless place that is the Plaza. I will watch the ceremony on television. If I don’t fall asleep.