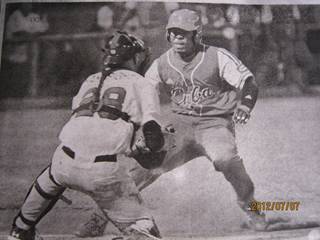 As I watched the baseball games between the Cuban team (made up of professionals) and the American college students, I felt embarrassed. How exactly is it possible that our novice Cuban baseball players were not in on this game so that they could gain some experience?

On top of that, the stadium was nearly empty. There were a few young people with shirts of the same colors (possibly taken from a school), plus some older people with the faces of Party stalwarts, perhaps a Cuban family member or two, and a very small number of little American faces occupying just few seats. How is it possible that these events, which have aroused so much enthusiasm among our fans, did not fill the Latin American Stadium? It all seems to indicate that admission is selective.

How long will we go on deceiving ourselves, pitting complete professionals against boys who, for the most part, are minors. Nevertheless, in spite of having used our best pitchers, the boys gave them a run for their money.

The press quietly mentioned in passing that the second game, which had been tied six to six, was won by our team almost by accident since the young Americans, in point of fact, had played much better. They go on to justify pitting them against seasoned professionals rather than fellow amateurs because the Americans are much more experienced, having been playing since childhood. Why is this the case? 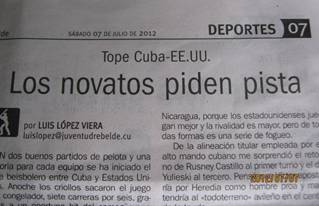 Among other reasons there are hardly any fields left on which to practice. The former Bohemia lots have been planted with banana trees and closed off because of their proximity to the Ministry of Defense (MINFAR) and the Central Committee, and a multi-family micro-brigade housing complex is being built in the ball field near the Orbay y Cerrato lumber company, to cite just a few reasons. It is also worth noting that previously – before 1959 to be exact – a professional Wilson baseball cost 1.50 pesos in the currency in which salaries are paid. It now costs several times that in hard currency (CUC) virtually out of reach for most Cubans. It is the same with gloves and bats, which makes it impossible for any boy to practice this sport.

But what in my judgement is even more unfortunate is to see how, on my planet,a sporting event is turned, through sleight of hand,into a political game.