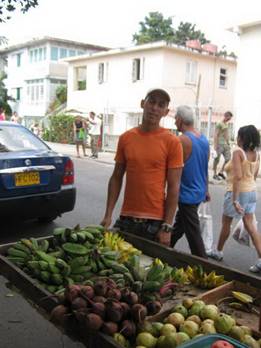 For the last few months, since the new apertures from the government, the city has been filled with carts selling various agricultural products. They differ from the existing agricultural markets, precisely because of the variety and presentation offered. Many people have called this progress but it is, in my humble opinion, quite the opposite.

It is true that they are solving a problem of the people, and they are themselves opting for a job that until now was practically underground, and which was almost lost — street vendor – which allows them to be self-employed and to make a living for them and their families. What’s more, in most cases these are young men and even women who did not continue their studies, perhaps due to lack of support.

This profession of peddling with carts flourished in the forties, but already by the early fifties, due to social progress, it was disappearing, giving way to establishments where what was offered was more stable and pleasant, with all these agricultural products both local fruits and imported. What we have now is that the former stores of this type are closed and vacant, and in their doorways, without any kind of hygiene, piled up in old dirty drawers, are the products, leaving the sidewalks and streets full of their red dirt, once they’ve finished selling, making the city even dirtier than it already is.

With the emergence and proliferation of supermarkets, these carts disappeared permanently from the big city, and were found only in some neighborhoods on the outskirts, but in smaller numbers. 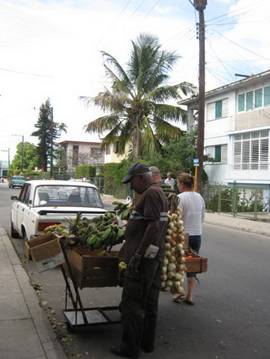 Now, in the 21st century, in 2012, they are resurfacing as on Fenix Street. Most people consider it an achievement, as they see agricultural products and some fruits reappearing, clean and well presented, with better quality and prices than in state shops, where they sell them with soil, roots and leaves included, and where you have to be alert not to be fooled by the prices, because the weight includes all of the above waste.On the one hand, it is nice to see this new activity reappear, but on the other hand it is a sad fact that all the young labor force that could be working in a large and pleasant supermarket, with good working conditions, as required by progress, rather than having to push these carts from sunrise to sunset in different neighborhoods, and to endure nasty comments from some retrograde or official-like people, who tend to criticize, not realizing that they too are part of the same suffering people, and they are trying to defend a system that has only made us all regress.

It is said that soon the authorities will prohibit all this once again. Is there any foundation in that? Because they enrich and offer products that do not exist in the state agricultural markets. If it were not so tragic, it would be laughable. The real reason for their possible elimination is that every day, they are a public demonstration of the government’s inability to solve the most pressing problems.