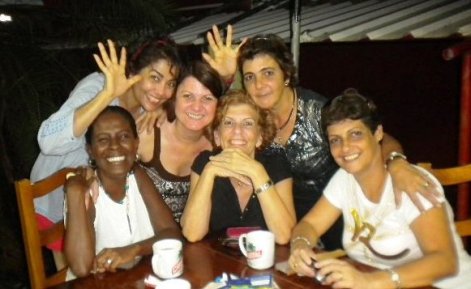 Rafael’s childhood playing chess obligated me to wait at tournaments for long hours at a time for 9 and 11 rounds with other mothers who were also waiting for their sons. I made friends with a heterogeneous group of them, although we started to see less and less of each other as our kids grew up.

Taking advantage of the fact that one of them was about to travel, we decided to get together after several years of not seeing each other, and after giving ourselves a little “chucho,” we caught up.

Daimi, the one that was going to travel, an engineer, made the most money attending to an old lady with Alzheimer’s on the Peninsula. Her life over there is to work and send money back to Cuba while she can take her son who, of course, is of age to serve in the military.

Irma, married to an eminent scientist, is doing well, she has been able to travel with her husband. He is a party member, politics don’t interest him, but he has a good job.

Gina, a single mother and housewife, challenged her boyfriend abroad to “bring up your kid.” Noctámbula y farandulera,  the soul of the group, the essence of her is french perfume and menthol cigarettes, but she is President of her neighborhood Committee for the Defense of the Revolution.

Mercy has resorted to a contract of employment for the summer months which they have done for the past two years over there in Central America.

Ana Maria works in a hospital, it’s no big thing but it’s close to her home.

My story aroused the curiosity of my friends. The blogger housewife. They didn’t know anything about the topic, with the exception of Irma, although I did need to clarify that it doesn’t pay a cent and that nobody “orients” me as to what I should write. We spent a fun afternoon full of jokes and anecdotes. We said goodbye to our friend with kisses, hugs and even tears, and take care Regina, you’re crazy.