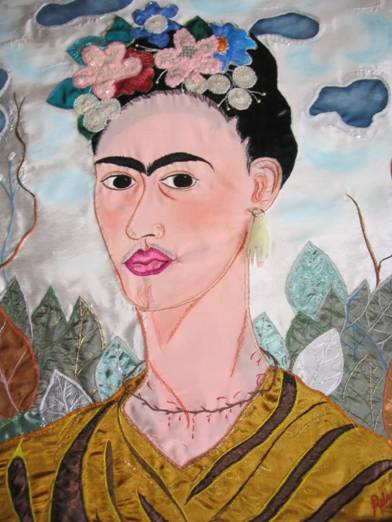 The daughter of a Mexican mother and German father, Frida Kahlo was born in Coyoacán, Mexico on July 7, 1910.

She attended the Escuela Normal de Maestros and graduated from the Escuela Nacional Preparatoria. She dreamed of becoming a doctor until a terrible accident destroyed her body, forcing her to lay in bed for many months and receive painful treatments, causing her to stop studying medicine.

In the midst of her dramatic convalescence, her iron will and attachment to life led her to become extensively self-taught in the arts and the mysteries of painting. She became an artist and took advantage of her knowledge to teach classes at the Escuela de Artes Plásticas in spite of her physical limitations.

Her first exhibitions demonstrated her talent, which she continued to develop and which culminated in a magnificent work, turning her into one of the most famous painters of her type worldwide.

She impressed upon her work all the pain, feeling, and sensitivity that characterized her life. The memory of Frida is inextricably linked to the great muralist Diego Rivera, who was her husband, lover, confidant, and greatest critic and admirer. In spite of a tempestuous marital relationship, art united them until the end of her life, on July 13, 1954.

This month, Mexico pays homage to those who hold a seat of honor in the plastic arts of the 20th century. I am also joining in this commemoration since Frida was a source of inspiration and presence in my patchwork art.

Frida Kahlo narrated her life through painted images. The painting of this great artist is like no one else’s. As Diego Rivera, her husband, pointed out one day, she “is the only example of the history of art, of someone who tore open her breast and heart to tell the biological truth of what she feels in them.”

Most of her work is unknown; it is held in private collections and by friends. The value of it grows each day.