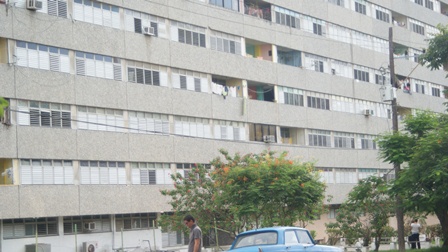 Leaving the house, any indistinguishable morning, on the park’s second bench a group of neighbors. Happy retirees.

It is not that they are happy for having learned some kind of existential revelation in the autumn of their lives. It would not be impossible although I venture it difficult to believe.  Above all after having trained all their lives to ignore the inner sirens in order to manage to obey the voice of a supreme leader.

The children live abroad. They work and are good citizens. They provide them the infinite joy of not feeling themselves on the verge of death from malnutrition, not seeing themselves reduced to the most frightful poverty. On a more philosophical note: they know the joy that civilization has brought to correct our own fragility and the contemplation of our own misery. But elsewhere in Havana other old people aren’t so lucky. Cuba is not a completely civilized place.

The older adults on the bench of the Transport building are avowed revolutionaries, at least those that have gathered this morning. They have been their whole lives. I must clarify that I do not harbor any bad feeling towards them.

In my neighborhood there are frequently older adults who maintain a calm acquiescence to the regime. And curiously the majority of them have a child who sends a remittance. I still remember how Teresa stepped in to defend the Revolution a few months after having been to the United States, which did not refuse her a visa to go see her daughter, an American citizen, whom she allows to pay her for the whim of being one of the most active CDR* members of the building.

They are the most complete image of happiness in the history of the Revolution. They have never been prisoners for protesting against the unelected government. They have never gotten into trouble. They have completely and at all times obeyed the discipline imposed at a national level by the Chief of the State, and in exchange have managed to live with all the security that a society under totalitarian control is capable of providing.

In a really competitive system, above them would be any marginal character (of those that have still not achieved the dissident character), who could not adapt himself to the same discipline where they have borne fruit and have achieved a foothold in the middle of a society that sinks every day. Where the rule has been the most complete mediocrity, they are the best examples of how well it rewards its followers.

In spite of having taught their children that only the State is good — protector of the poor and natural resources — and that the men who form the State are the vanguard of supreme valor that is the Revolution, their children have preferred to emigrate.

But so that no one is confused, the parents say that the reason was the economic problem, that if there had not been the economic embargo, they would have stayed working for the Benefactor State that trims the claws of our base passions and the vices of democracy and capitalism: the vices of liberty — missing in the great spirits who are the messiahs of Social Justice, who conceive of humanity as a huge block, a human chalkboard that projects figures against capitalism and western hegemony headed by the United States; and who intervene in our selfishness as judges placed by an indecipherable providence, sacrificing our freedom of expression in the interest of reaching collective objectives for the good and peace of Humanity.

Certainly my happy neighbors do not know Charito. Maybe if they knew her. . . Charito is a Lady in White. About the Ladies in White they only know what the television tells them.  It does not interest them to find out who they are because they feel the invisible hand that would stop them from taking the prohibited step. If, perhaps, they were suddenly going crazy and it was given to them through solidarity — not between peoples but between their nearest — and to seek the truth… But that holy naivete that they insist on suffering from would make them participate in the bacchanal of an act of repudiation.

From Charito, the Lady in White, everything she was selling in her tiny stall was confiscated by police. And they hit her with a huge fine: 1,200 pesos. She does not have the money to pay the fine and so she planted herself outside the station: alone.

The children of L, of C, and of T and even of the fundamentalist Officer who has a stepson in the United States, enjoy all the rights and freedoms available to them outside of Cuba, but they still don’t do their parents the favor of explaining to the why Charito protests.

*Translator’s note: CDR = Committee for the Defense of the Revolution, the block watch groups.