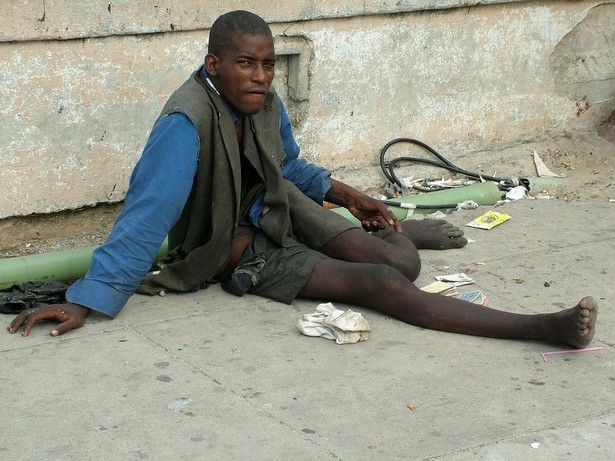 The cold and humid days are public enemy number one for Havana’s beggars. When the north wind comes and the sun hides, the indigent disappear as if by magic.

In the Víbora section, close to the Plaza Roja (Red Plaza) — which is neither a plaza nor is painted red — a dozen beggars have appropriated a corner with wide doorways that serves as bed, roof, and table. Also as a walking junkyard.

Luis, one of the indigents who lives in the center corner of Carmen and 10 de Octubre, from very early with his alms-seeking buddies, starts drinking a homemade rum processed with coal and cow shit, of a nauseous odor and almost impossible to drink.

When the sun warms, they’re already drunk. With no food in their stomachs and then an occasional brawl with some transient, like flies they fall on the boxes that serve as their mattresses.

In Havana the beggars have turned habitual. In their first two decades, Fidel Castro’s revolution managed to sweep indigence off of the streets. Yes, there were sympathetic and eccentric vagabonds like The Parisian Gentleman, who believed himself to be a Spanish duke and recited poems from Lorca or Machado.

He was an attraction for residents of the capital, who chatted with this congenial and compassionate nut called the Parisian Gentleman. After his death, marketing specialists converted him into a mascot and went as far to erect a bronze effigy of him in the heart of the old city. The composer Gerardo Alfonso dedicated a song to him (http://www.youtube.com/watch?v=5fbiZGbAOxU).

But these 21st Century beggars, almost all born of the revolution, are human beings. A mix of schizophrenia and violence who can’t say more than 200 words and move like rats in the dawn to strip the garbage cans.

Some are incurably demented; their place should be in psychiatric clinics. But the indigent of Havana are afraid of being locked up in a room of the sadly famous Mazorra Hospital, where in January 2010, ill-treatment, low temperatures and hunger caused the deaths of 26 mentally ill.

They prefer to live in the street. They feed themselves from leftover plates of cafés and restaurants, or thrown away bits of food found in garbage containers. They sleep where night finds them: parks, doorways, or stairways of buildings.

For a few pesos they are used to doing it all. They clean flowerbeds, collect raw material, ask for money in well-travelled places (above all from tourists), and at the traffic lights of crowded avenues will run a rag over cars’ windshields.

Lacking family and a home, their favorite pastime is impulse drinking, in great quantities of a stinking rum, specially made for the poor and forgotten, a lethal potion that knocks one out on finishing the liter.

Only the cold succeeds in chasing them out of their usual street refuges. Alarmed by the growth of the number of beggars in Havana, a personality of the Catholic church has become sensitized and studies how the Cuban subsidiary of Caritas and the churches could help this army of the wretched.

The official press, blind to the problems of the citizenry, prefers to give publicity to hopeful news and report achieved production figures, in whatever province.

For its part, the biggest artisan of a Revolution, who swore to wipe out mendicity, looks elsewhere. His eye is on themes debated in the world’s centers of power. From the capitalist crises to this nuclear war which, according to him, is about to come.

The plans of his brother to get the economy moving don’t consider the elimination of indigence. The picture is heartbreaking.

The economy is in the basement. There is little money in the State’s coffers, and 1,300,000 workers face work layoffs within three years. Seen this way, perhaps for the governors the growth of mendicity will be a lesser evil. They prefer to skip that page.