My name is Ramón Enrique Ferrer Yero, son of Enrique Ferrer (an electrical engineer) and Elisa Yero (a homemaker), I was born on 6 September 1941 in Cuba’s Oriente province, in my dear Palma Soriano, in a home located on Cisneros Street, number 4, top floor, between Martí and Maceo Streets. You can imagine that, with that kind of address, I was born a patriot.

I went to a Catholic school of the Claretian Brothers, then studied at the Sanderson Institute, and later, in the Sinai Baptist school. I didn’t make it to college, due to my views, openly contrary to the evil Revolution, the government didn’t allow me to continue exercising my right to study and chose to cut short my professional life.

In 1962, they started to make my life impossible. They summoned me to the offices of State Security, they pressured me, they tried to blackmail me, they surveilled those who visited my house. All of these things I’m telling you would provoke a discontent in me that I shared with many people. 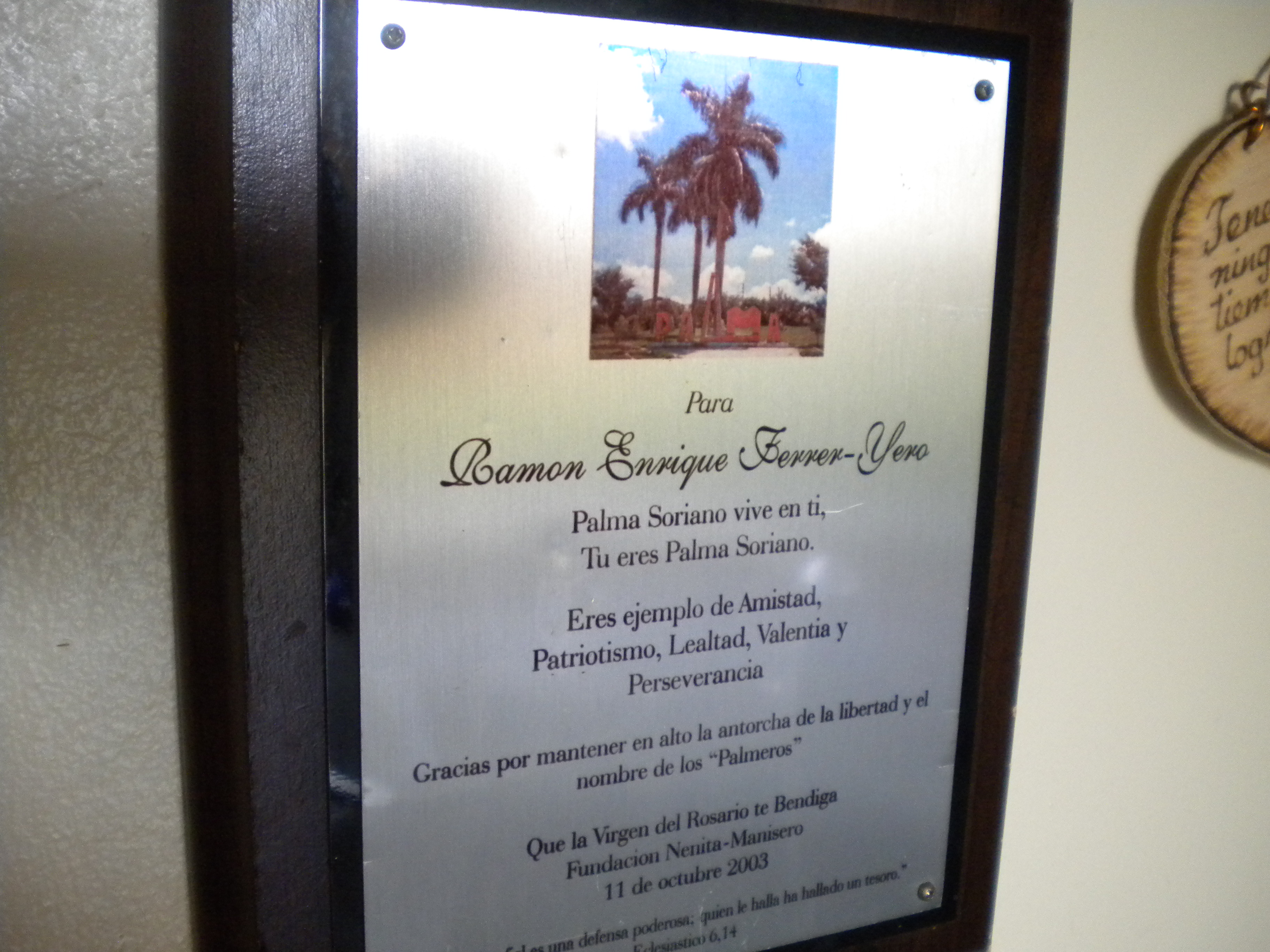 I’m a practicing Catholic, and I used to attend the church of the late Father Cayo Simón, the parish priest of Palma Soriano. One June day of 1964 or 1966, during a celebration of Saints Peter and Paul, after so much pressure, several of my friends and I agreed to meet in the church to go out and protest, with pots and pans. State Security found out, and together with the Communist Party, brought out many people armed with planks with nails to repress our march. The echo of their cries of “To the firing wall! To the firing wall! Down with the gusanos*!” still sound in my ears… all of a sudden a mob removed me from the church, dragging me before a rudimentary tribunal that they had organized for such needs. I don’t know how I got out of there. The mob that chased me took it upon themselves to stone my house, yelling those stupid chants that struck with the same force as rain against sheets of zinc. Someone I knew well, whose identity I don’t wish to reveal, got me out of that severe nightmare through the patio of my house, put me in a car, took me to the province of Holguín, and, from there to Havana. After some time in the capital, I decided to return to Palma. Immediately after, I was called up to conscripted military service, which wasn’t even military service at that time, but rather the Military Units to Aid Production (UMAPs, by their Spanish initials). There, there were students, doctors, engineers, lawyers… it didn’t matter if they were for or against the Revolution.

They cut the lights off on the town, put us on trucks, and took us, after stopping along the way and picking up youths in Contramaestre, Baire, Jiguaní, Bayamo, Holguín, Tunas… to the stadium in Camagüey, where it rained unceasingly. After registering us, they put me on a cart and sent me, together with a group of lads, to these camps bordered by barbed-wire, in the town of Vertientes, that looked rather like the concentration camps of Hitler’s Europe. Trenches, mud, beatings, torn Bibles, mistreatment, drowning victims, suicides, long walks, early mornings, bad nights, rotten food, thirst, fasting, heat, cold, sickness, skin infections, shivers, rain, sun, forced labor, sugarcane fields, beatings, lost teeth, bayonet-stabbings… Who could forgive such an atrocious thing?

When all of that ended I started looking for work, but I was now labeled and no one wanted to hire me. I got caught by the Slacker Law and they took me to work at a stone quarry, breaking up gravel. On returning to my town, they put me to work sweeping all the parks of Palma Soriano, from where I kept conspiring in activities against the evil Revolution.

The constant threats, disrespect, and summons were my inseparable companions. In 1995, I was taken in by the refugee program offered by the U.S. Interests Section in Havana.

A long while later, and after offering various bribes, they finally allowed me to travel. Upon reaching my destination, I was received with an admirable and emotional welcome that left me speechless. But, to tell you the truth now, in that precise moment, my body was here in the U.S. and my mind over there in Palma, from where I never departed. I want to be among Cubans, so I came to Miami. I could not, nor can I, abandon the cause of Cuba. Here, I signed up with all the different organizations to which I belong to today.

I’m an only child, and my mom wanted to see me after such a long absence. I attempted to go back to Cuba to give her my last farewell, but they denied my entry. That has been the worst punishment. My mother died of sadness; you can imagine how much family separation can hurt. Today I live here with my Virgin of La Caridad del Cobre, with my St. Jude, and with my little dog, Niña. What I most wish for, when that horrific tyranny falls, is to fly off to Palma even if I have to live on the banks of the River Cauto in a house built of palm fronds and timber. I want freedom and democracy in my country; maybe that’s why, each time I lay down in my bed, I can’t fall asleep without first going for a stroll, in my mind, all over my Palma Soriano.

* Translator’s note: although less in use today, gusano, literally “worm”, has been the political epithet historically used by the state, its media, and its supporters in post-1959 Cuba to denounce counter-revolutionaries and citizens who wish to leave the country.