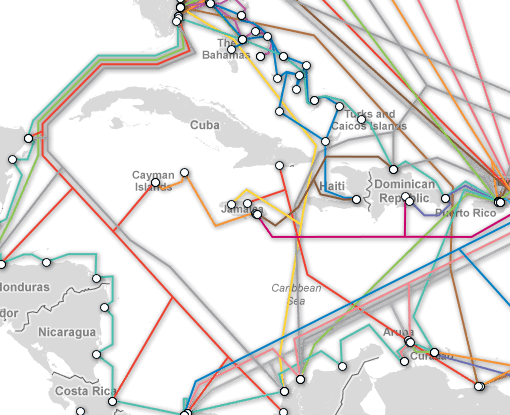 The map shows a portion of the world with the fiber optical cables that give people to access the Internet. Cuba appears isolated in it, blockaded in a trip straight to past at the whim of its rulers.

In 2009 a report published by EFE news agency noted that “A communications company in Miami (Florida) will install a fiber optic submarine cable to link to U.S. and Cuba, which ‘will be the first of its kind ‘.”

The report detailed that the company, TeleCuba Communications Inc., based in Miami, has been authorized to do so by the U.S. Government and that the cable service would start operating from 2011.

But as always Cuba rejected the offer saying everything was already ready for Venezuela to provide the service.

The laying of the cable, roughly 100 miles, which would cost approximately 18 million dollars if it came from Miami to the island “would be much more than just a standard commercial cable,” according to what the entrepreneurs — who never received the Cuban Government;s authorization for installation — said at the time.

This, a good saying from José Martí in one of his poems … “time passed … and an eagle passed over the sea.”

A few days ago the government of the island made announcements in the Gazette of Cuba in relation to some “little permissions to access the Internet” and once again the theme was picked up by news agencies and newspapers, reporting on the opening of a few centers where, under surveillance and at a high price, “some Cubans” could connect to the Internet. They all found it interesting because they believe that “change is coming.”

And are Cubans traveling the world after changes in the measures for permits to travel?

Translated from the blog La frontera transparente (The Transparent Frontier)