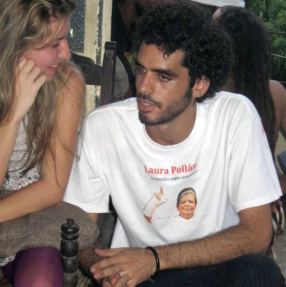 More than sixty people, predominantly young, braved the rain to reach apartment 5 of the building at 4204 Calle 35, between 42 and 44, Playa, Havana, where El Sexto, Gorki and guest artists offered him the hand of brotherhood, at a display of faces, cartoons, strokes and drawings that make up a singular urban iconography, unorthodox and challenging.

Even the faces, on cardboard or canvas, have a scriptural stroke, belonging to the graffiti and caricature, a specialty of Maldonado, who mastered the craft and expressive synthesis. Integrated in the artistic work are some drawings on the walls, a police patrol, image compositions, the face of the creator with the rooster on his head the excellent poster presentation.

The music, the handshakes, chats with friends on the balcony and the signing T-shirts by El Sexto rounded out the event. The rest was in the atmosphere of the attendees, the youthful energy — “bomb” according to the boys — and the uninhibited discussion about the graffiti, the country and what happened to the creator, who showed the video filmed in Kcho’s house — a painter for the government — at whose residence he was taken to be indoctrinated by the same agents who kidnapped him days earlier.

I call your attention to several faces painted by El Sexto: naive, relaxed, scared, cocky; faces Unmotivated and Motivated, with a sign (“I lost my fear: kill me”; “I was-I am”). Or textual images: “If you take this piece of paper I am taking a picture from behind,” “To conquer me you need weapons, police, jails; to conquer you I only need spray paint and this paper.”

The works testify to the apparent lightness and critical and paradoxical message of the Cuban reality, in keeping with the mission of graffiti, marked by the need for expression and using urban space: the walls of public places. In El Sexto Truth, we read: “Apparently, graffiti is prohibited but not the lettering of “Con la guardia in alto” (Standing Guard) and “Vamos bien” (We’re Doing Fine), nor the repeated slogans of the Committees for the Defense of the Revolution, the Champion Industriales baseball team, and the Five Prisoners*… So it occurred to me to fill different places with the graffiti of the word Truth, to see how the State covers over or erases all those letters, which would mean a daily covering over of the Truth on the part of those up above…”

In addition to the graffiti artist being honored and Gorki Aguila, the evening was of Saturday, October 29, was shared with Charly Mucha Rima, Cuentas Claras, Maikel Extremo, Jimmy con Clase, BJW and other representatives of hip hot, as well as photographers, writers, independent journalists and alternative bloggers.

*Translator’s Note:
The name “El Sexto” — The Sixth — is a play on the so-called “Five Heroes” (or Five Prisoners) — men imprisoned in the United States for spying on behalf of Cuba and other crimes (one of whom has recently been paroled).