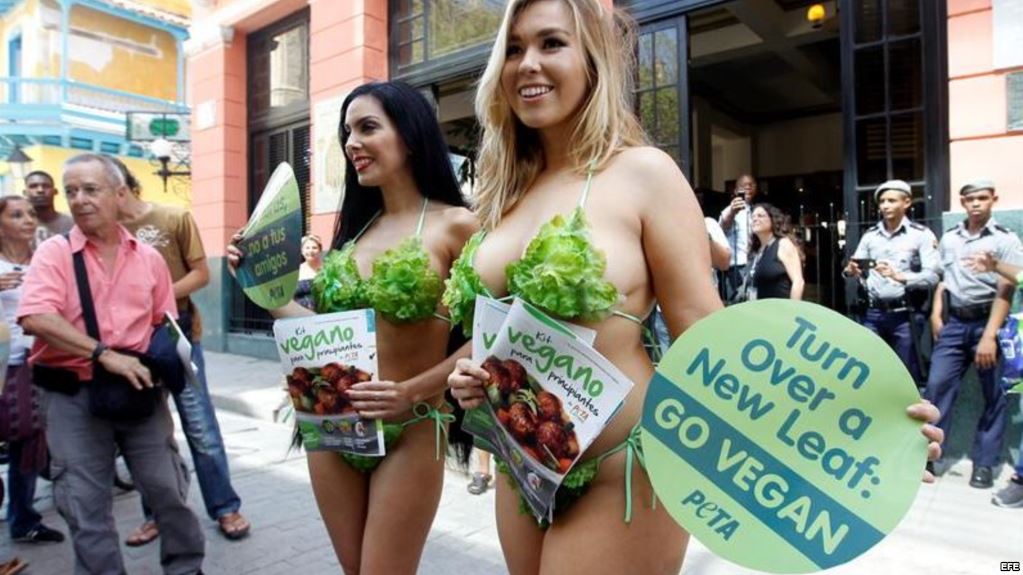 Juan Juan Almeida, 4 March 2017 — Another crazy initiative…a bit picturesque, perhaps interesting, but totally absurd. Representatives of PETA (People for the Ethical Treatment of Animals) arrive at the José Martí Airport in Havana with the express intention of combatting animal abuse and creating vegetarian habits on the Island.

The idea of watching young activists dressed in lettuce leaves attached to green bikinis makes for an attractive attention-getter–and it surprisingly reveals the enormous ignorance of many about Cuban history, politics, culture, laws, and society.

Perhaps the authorities, as part of a “considered” neo-diplomacy, allows these young ladies to promenade with gossamer lightness through Old Havana, dispensing souvenirs, feeding homeless dogs, or handing out introductory pamphlets on vegetarianism with recipes for beans and rice. But there exists, and it is good to know this, (1) a cautionary, provincial ordinance that more or less says the following: Anyone who publicly goes around the Cuban capital dressed in swimwear, even when we all know that it is a coastal city, commits a violation and could be fined.

Regarding beef, somebody should explain to the PETA activists that, ever since July 12, 1963–creation date of the sadly famous OFICODAS (Offices of Food Control and Distribution)–(2) Cubans have been forced to exchange beef for chicken, ‘hotdogs’ and/or fish [see (4) below, there is no fish], depending on which series is listed on the ration booklet.

In the greatest of the Greater Antilles, (3) there is as much beef consumed as in India, where cows are considered sacred. And, besides the facts that Cuba is (4) the only island in the world whose diet does not feature fish and that Cubans born in that time euphemistically called the Special Period (5) grew up without a culture of beef consumption, (6) one pound of vegetables, in the agricultural market, competes with pork in terms of price.

It would be useful to know who will offer lettuce to these young lovelies because, even though Raúl Castro in 2008 started leasing out 1.7 hectares of land in usufruct for agricultural use, (7) Cuba still imports more than 63% of the food it consumes and the (8) fresh lettuce offered in the restaurants of tourist hotels is not cultivated on the Island.

A misguided plan which, save for the level of risk, is very similar to that of the Bolivian President Evo Morales Ayma–who even knowing the fate of his ex-comrade and mentor, the Venezuelan Hugo Chávez–still decided to travel to Havana this past 1 March to receive urgent medical care in Cuba.

The principal enemy of people who waste time creating publicity stunts is common sense. Now is the time for momentum, determination, and awareness-raising about real matters, such as the disturbing rise in the crime rate, gender-based violence, and the innumerable cases of domestic violence. To name just a notable few.