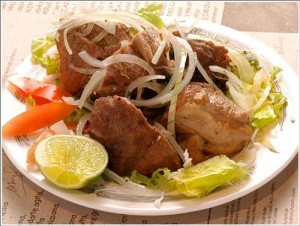 Thanks to a hundred dollars from some relatives in Miami, the Calderón family knew they could eat well for four days. And Oneida, the seventy-one year old homemaker in charge of feeding the seven members of her family—five adults and two kids—could take a little break from the long lines and having to go to the farmers’ markets at closing time when things go on sale.

Let’s take a look as the Calderon’s menu for those four days. On Thursdays there was white rice, black beans and one hamburger per person. For salad, a slice of avocado. Only the children had dessert—a little scoop of ice cream purchased at a small privately-owned cafe.

Friday’s meal was not bad. There was a tenderloin filet, delicately thin, which she got on the black market for fifty pesos* per pound. White rice and chickpeas, purchased at the mall, with artisanal ham and chorizo from private farmers’ markets. Cucumber salad and, for the children, an ice cream popsicle covered in chocolate, which are sold by street vendors on bicycles for five pesos a popsicle.

The winning streak continued on Saturday.Congrí,braised beef, yucca with garlic sauce and fresh guava juice. For dessert the children had a surprise—pastel oriental, prepared by freelance cooks.

Traditionally in Cuba the biggest meal of the week is usually prepared on Sunday. That afternoon the Calderón’s dined on two chicken drumsticks per person – purchased for 2.40 convertible pesos* a kilogram—rice with black beans and green bean salad. There was dessert for everyone that day—guava jam with homemade cream cheese.

With their bellies full, the men of the house passed the hat and went out to buy a liter of Havana Club white rum for 3.85 CUC*. They drank it while watching a pre-recorded broadcast of English league soccer. The women chatted, waiting for the soccer game to end so they could watch rented videos of the final episodes of Pablo Escobar, Boss of Evil, a mini-series that half the island is hooked on.

Once the three hours of her day-off had ended, Oneida went back to worrying. For those three meals—including cooking oil, seasonings and condiments—she had spent 56 CUC. The next day, with the 136 pesos and 9 CUC remaining, she had to plan the menu for the upcoming week.

The Calderón family lives in a three-bedroom house in a Havana suburb. In Castro’s Cuba they could be considered “middle class.” Except for Oneida and the two children, everyone in the family is a professional. If their monthly salaries, paid in non-convertible pesos, are combined and hard currency remittances are included, they bring in a total of 3,258 pesos a month—much higher than the average Cuban family’s income.

The Calderon’s spend 95% of this on food. And they only have one meal a day. For breakfast they eat bread with homemade mayonnaise and coffee. For lunch there is omelette or croquette and juice or a soft drink. When an overseas relative sends them $100, things get better. They can buy good fish, chicken from the hard currency store, a leg of pork, cured meats and even beef. But not everyone has relatives in the United States or Europe who can regularly send dollars or euros. For them the issue of food becomes real headache.

It’s always good to remember that journalism is reiteration. A year ago a list of food prices, in hard currency and in pesos, was published inEn La Habana, which showedyou can eat well if you have enough money. The price of powdered milk had risen substantially, from 5.25 to 5.80 CUC for a one kilo box in the malls. On the black market a two-pound bag was going for 60 to 80 pesos. Keep in mind that the average monthly salary in Cuba is 450 pesos, the equivalent of $18.

Oneida buys and reads the papers. So, when on September 13 she read in Granma that “approximately 19% of Americans have trouble buying food,” she could not help but smile. “At least there the figures are released and are known. And only two out of ten people are in this situation. I can assure you that here it’s everybody. Except those in charge, of course,” she said sarcastically.

Eating has been and continues to be a big problem for Cuba. Eating well is a subject for another chapter.

Translator’s note: Cuba has two official currencies: the moneda nacional or peso, in which salaries are paid and is not convertible, and the CUC or convertible peso, which is pegged at 1.10 to the dollar.