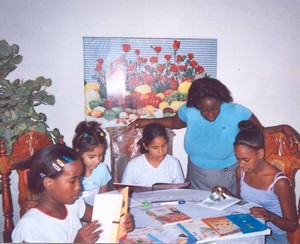 According to Mercedes Fresneda Castillo, fighter for Afrocuban rights and member of the Ladies in White support group, the community activist and dissident Sonia Garro Alfonso, 35, was detained by the police on Thursday, July 14 at 7 PM.

“I was with her until 6 PM. Hours later, a neighbor telephoned me and told me the police had taken Garro away to an unknown location, along with her husband, Ramón Alejandro Muñoz, also a dissident. Then I asked around and found out that Sonia is under arrest in the 7th police station in the Havana neighborhood of La Lisa,” said Fresneda.

Previously, Garro had been advised by the intelligence services that they were not going to allow her to carry out the public protests that, along with six other women, she frequently carries out in various Havana locations and plazas.

This past May her husband, Ramón Alejandro Muñoz, played a leading part in a famous incident when he chained himself, machete in hand, on the roof of his house while demanding freedom for Sonia, who was under arrest at the time. This indignant Cuban still keeps up his rebellious attitude: he goes out in public with one arm in chains.

Garro has been particularly active in the past few months, but without neglecting her community project to help the poor children of her neighborhood, no matter what the political beliefs of their parents may be.

These women’s street protests are considered a serious threat by the State Security forces. They have been threatened with arrest and trial, particularly Sonia. In the month of June she complained that the number of the case they have opened against her is 2801/2011.

Sonia Garro as well as Mercedes Fresneda and other women have been reminded by the authorities of what Fidel Castro said in his day, and which has been firmly reiterated by his brother: that in Cuba the street belongs to the revolutionaries.

Photo: Laritza Diversent. Sona Garro with some of the children from the independent cultural center that operates in her home, on Avenida 47 No. 11638, between 116 and 118, Los Quemados, Marianao.