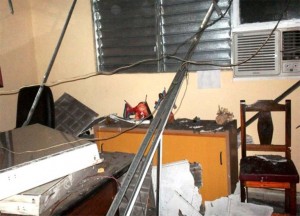 PUERTO PADRE, Cuba, November, www.cubanet.org — The latest collapse in this city, that of the carpenter’s shop El Nivel, and the next that presumably will occur, that of the Plaza Hotel, make the residents of Puerto Padre ask themselves:  How long will this town destroy itself without the government doing anything to stop it?

Of the five hotels that used to be, only two are still in service, Villa Azul and Campana.  Comodoro and Plaza remain closed, falling to pieces, and of Colon there remains only a foundation.

The Sierra, one of the best restaurants that was, remains scrapped, as Hurricane Ike left it in the early morning of September 8, 2008.  And The Vaquerito, a cafeteria that used to offer various dishes at affordable prices to people of low income, also had to close its doors given its calamitous state.

In the same city center, the shoe store has already come tumbling down, and the principal repair of the Hospital Docente Guillermo Dominguez, today in the worst state of sanitary health, fails to materialize.

“As of today we cannot say that we have the resources to undertake these projects,” said the president of the Municipal Assembly of Popular Power, Miguel Jorge, interviewed by local television last week.

Mr. Jorge’s claim is a fallacy: Puerto Padre does generate financial resources capable of achieving its restoration, but they are not going to wind up in the municipal chests but at other lofty bodies of Power.

Nothing serves better than this example: in the same city center where the mentioned collapses have occurred, and where others will occur for lack of undertaking urgent repairs, seven “hard currency collection stores” (TRDs) — as these State stores are called — are operating.  In one of those, for certain the smallest, they have daily sales in excess of three thousand five hundred convertible pesos.

This small TRD alone annually collects more than a million and a quarter convertible pesos, with only the work of three employees.  And the profits of a TRD are well-known: “With what I sell in a day, they can pay me my salary for a year with money left over,” an employee told me on condition that I not reveal his name to the press.

Thousands of Puerto Padre residents live abroad, mainly in the United States, and except for stingy people forgetful of their origins, they all send help to their family members, in many cases old people, who, without the remittances from their relatives, would remain malnourished if not dead if they relied on food rations.

Food, clothes, shoes, domestic appliances and construction materials are sold at prices much higher than the realistic sales figures, producing earnings which, if only a part of them were spent on the municipality, today Puerto Padre would not present, in most places now, this image of a bombed city.

In addition to having the Antonio Guiteras headquarters, the major sugar producer in Cuba, Puerto Padre counts on another privileged “industry”: that of the remittances.

But while their absent children send heavy sums from abroad in convertible currency, a great part of which is going to wind up in the cash registers of the TRDs, the city collapses, without the authorities doing anything to stop it.

Remember this a crime against humanity.  The historical legacy of people is not only destroyed by action, with bombs, but also by omission, on the part of those who have the responsibility of preserving it for new generations, and yet they remain with arms crossed, while the cities collapse.

Notices warning “Danger, collapse!” are not rare in this city.  Hopefully those posters soon will have no place in Puerto Padre, and the Plaza Hotel will not end up in ruins as did our emblematic Hotel Colon.

Hopefully. We children of this town work for that, those of us who remain here, and those who left, and no one, through whatever powers they may possess because of their cannons and tanks of war, is entitled to divert the channel of our sweat to add gold braid to their uniforms.