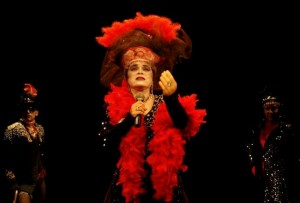 A friend from Miami told me over the internet last Friday, that in July he saw two theatrical works representing the island in festivals in the United States, “where there is a real invasion of Cuban artists, including orchestras, troubadours, reggaetoneros, and dance and theater groups, almost all very good, although some are irritating due to the ambivalence of their music or the statements they make, not thinking that here there are no issues of ‘enemy propaganda’ or ‘ideological diversionism’.”

The theater groups representing Cuba in the United States were El Público and Buendía, both revitalizing collectives due to their way of making and conceiving of theater. The former performed The Bitter Tears of Petra von Kant, shown as part of GLBT Performing Arts Theater’s “Out in the Tropics,” at the Colony Theater of Miami Beach. The latter performed their versions of The Visit of the Old Dame and Charenton, premiered in Havana and seen now at the Latino Festival of Theater, organized each year by the Goodman Theater of Chicago, from where they went on to perform at the Manuel Artime Miami stage.

I won’t tackle the three proposals, whose focuses, montages, and spell-casting strategies reveal the plurality of Cuban theater, marked by universal and local themes, austere stage settings, and dialogue that implicates the audience, whose eagerness is visible in Havana’s halls.

I’ll focus on The Visit of the Old Dame, a cruel and stark comedy rewritten by Flora Lauten (director) and Raquel Carrió (adviser) based upon the original by the German author, Friedrich Durrenmatt. The original plotline is preserved, but with a smaller cast that condenses characters and changes some details of language and narrative style, which suits its proximity to our Cuban reality.

With The Visit of the Old Dame, Buendía offered a theatrical metaphor of Cuban daily life, marked by confinement, misery, and intolerance. After decades of exile, now wealthy Clara Zajanin returns to the impoverished town of Gula, where she’s received as a prodigy child and future omen. She evokes her shadowy and frustrated past, the betrayal of a young-lover-turned-town-mayor, who will be the target of her vengeance, while the townspeople who once detested her now flatter her in hopes of loans and other favors.

Such an expansive scenic view would seem a pretext to create a dialogue with the public about the problems that erode human existence, recreated by the magic of theater, with excellent performances, live music that enhances the nostalgia in Martha Strada’s mythical voice, and illuminating references to the island’s context. For Buendía‘s cast, it’s as if foreign plays serve to support our imaginariums and utopias, the way to deal with that which is mythic and ordinary and to polemicize the present and future. 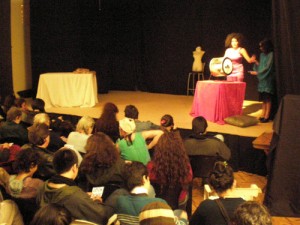 There’s an overflow of charm and splendid performances upon that altarpiece of scenic passions, where comedy wins the bout over tragedy and the masks reveal something of the mythic and the ordinary, without evading the problems of the present and future.

Those of us who follow the island’s theater scene know that Buendía Theater, founded in 1986 by the actor and professor Flora Lauten, is grounded in an intelligent selection of works, whose versions reach the public and speak to them of the issues, challenges, and circumstances that can move their lives.
The favorable reception by the public and critics in Chicago and Miami of The Visit of the Old Dame and Charenton, Buendía‘s recent works, will likely stimulate the further creative research of this drama collective, with their headquarters in the Coptic church on Loma and 39th Streets, in Havana’s Plaza municipality, where their sessions are held, along with their Research Workshop and Center for the Education of Actors, Directors, and Technicians.