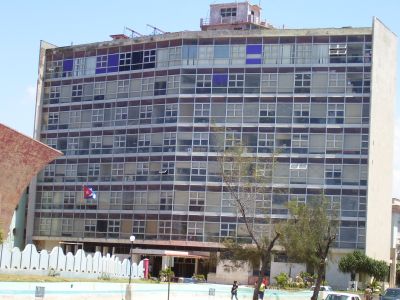 Since the Cuban government enacted amendments to an emigration policy that had remained unchanged for over 50 years, a trend that could have been foreseen is increasingly apparent: now almost all embassies suspect that every Cuban is really an immigrant, and consequently they have turned the process of obtaining a visa into a chimerical enterprise, translated into requirements that place the bar too high for most applicants.

These embassies may only exercise the sovereign right of each state to decide who enters their territory and under what conditions they will allow it, but there are stories that are so illustrative that they suspect that within this wood they could also have termites and to illustrate what I am describing here in broad terms, I have the testimony of Israel Reinoso Valdés , a Cuban citizen residing in Guanajay, Artemisa Province.

It turns out that Israel, along with Alonso along Lázaro Gonzáles Alonso and Gerardo García Álvarez — both also Cubans, residing in Guanajay and Mariel, respectively — decided to apply for a visa at the Guatemalan Embassy in January 2013.

The three young men met each and every one of the requirements of the embassy and consequently each was issued a tourist visa under the current procedure (Israel was issued visa No. 1,704,909). The three reserved tickets for February 6 for the price of $599.00 CUC, and flew to Guatemala on TACA flight TA451, which left Havana at 4:55 p.m. and arrived at their destination the same day at 8:20 p.m., local time.

Israel says that once at the airport they were taken aside by the Chief of the Immigration Group, Jose Canisa Valenciaga, who in an extortion attempt demanded from each of them the sum of $1,200.00 USD, which they had to pay through an intermediary, if they wanted to clear Customs; otherwise they would be deported to Cuba.

When they refused, the three Cubans were detained for more than 10 hours, held incommunicado like criminals, and not even allowed to use the restroom or make a phone call to their consulate.

The three young men were actually deported to Cuba on February 7, 7:00 PM, local time. The following day they delivered a first document of complaint to Cuba’s Ministry of Foreign Affairs (MINREX), in which they explained the essential details of the abuses committed against them by the Guatemalan authorities. After over a month with no response, Israel delivered a second complaint to MINREX and then made several more visits and multiple phone calls, all unsuccessful.

MINREX is legally, morally, and ethically obligated to represent its citizens in every country in which there is a Cuban consulate, and to ensure their rights, as is guaranteed in every Cuban passport that is issued. Absolutely nothing justifies MINREX ignoring the humiliation, abuse, and arbitrariness that a Cuban citizen has been or may be subjected to by any foreign authority.

True, the final decision on entry to a country may be subject to the discretionary consideration of the customs or immigration authorities, but here we have the case of citizens who rigorously complied with all the requirements of the Consulate of Guatemala in Havana — which as a result issued a visa that gave them the legal right to enter the country — and who in correspondence submitted all documents in the form requested by the relevant authority, but this was not sufficient to avoid being the victims of such arbitrariness.

There are rules, international mechanisms, and tools that can be used to resolve cases like this, where it is clear that three Cubans were victims of an outrage, because nobody in their right mind would pay hundreds of dollars for a ticket and fly thousands of miles just to drink a glass of water and return the next day without even clearing customs.

It is indisputable here that three Cuban citizens were subjected to a tremendous humiliation, were victims of attempted extortion and an undeniable abuse of power by corrupt officials.

Cuba maintains diplomatic and consular relations with the Republic of Guatemala and MINREX has an embassy in that country, so it has the resources necessary to intercede before the competent authorities — in Guatemala or any other country — to press the appropriate claims in cases like this where they deem that our rights were violated.

If that is not the case, then why are we paying the 100 CUC (the average salary for six months of work) we are getting charged for our passport, which supposedly certifies that, wherever we are, we remain under the aegis of the Cuban Government?

Or does that only apply during the time when we have to fill the plazas during grandiose parades, and not at the time when we need actually need help — away from our land in front of a despotic official? Will they always leave us in a state of helplessness when we decide to leave this country, where contrariwise they treat foreigners with kid gloves?

I doubt very much that their counterparts would stand idly by in a similar situation if a victim in Havana was a citizen of Germany, France, the United States, or any country whose Foreign Ministry is respected.

MINREX, the voice of the Cuban government to the world, should be at the pinnacle of what this moment demands, and it is therefore unacceptable to abandon us so completely — in this case it should never have been so slow as to issue its final response almost five months after the complaint was made, and thus tacitly agreeing that these young men “… did not meet the requirements of the Migration Act …” when in fact they met every requirement demanded by the Guatemalan Consulate. Moreover saying in effect that the three young men lost the money for their passage without recourse.

What if suddenly this case is not an exception? What if we have discovered a clear trend to treat us as the new plague, at least those of us who come to where we want to go?

Today it was Israel, Lazarus, and Gerardo. Tomorrow it could be any Cuban, including me of course. Because as a result of the brutal reality in which we live, and the indolence of our Foreign Ministry, we could be condemned to be seen as outcasts, as those “welcome” in the context of work missions, but then regarded with suspicion if we decide to travel to these countries by our own choice.

We, the children from the same land as the one that declared that “homeland is humanity,” something surely unknown to those corrupt Guatemalan customs officials.