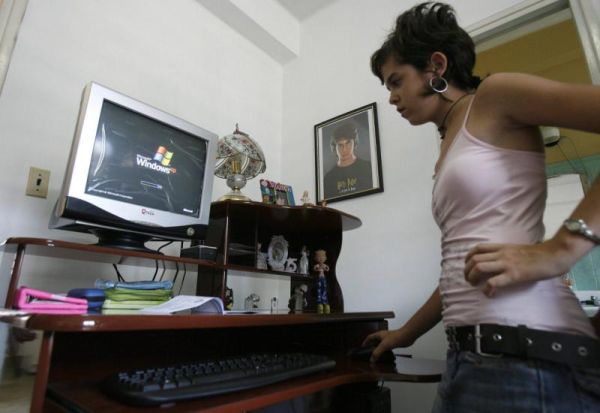 Cuba’s Ministry of Communications has announced the opening of a hundred Internet cybercafes throughout the whole country for June 4. The official press informs us there will be a doubling of the navigation capacity and a reduction of 1.50 CUC in the price per hour (to 4.50 CUC, or a little more than $4.50 US), if we compare it to the previous 6 CUC per hour it cost for an access card.

With the implementation of the 118 centers, government officials announced an increase to more than 334 computers with internet access. This is a ridiculous figure when taking into account that about 68,000 specialists  from the Ministry of Health use email and the Internet, who in turn sell it “under the table” at prices ranging between 30 and 60 CUC per month. The same applies to journalists, intellectuals and other employees of ministries and state enterprises that have access to the Internet from their homes and who, with this practice, earn extra money while helping to scale up access to the network among Cubans.

For the small business owner in Cuba is still more profitable to rent email accounts and Internet service “under the table” in the interstices of the black market. At the distance of a click or a discreet phone call it’s possible to have sixty or ninety hours a month, according to their needs. Use of public Internet sites for businesses such as real estate, sales of various items, and rooms rentals is infrequent. A domestic connection remains the ideal way.

Illegal Internet cafes, which operate at rates between 1 and 2 CUC per hour, will not be affected by this measure that is announced as one more reform of the Revolution, because payment rates, although they have fallen by a third, will still be prohibitive for most people, if we consider that the minimum wage is about 220 Cuban pesos per month and a connection card cost 112 Cuban pesos for an hour.

Email service is commonly used for messaging with family and friends abroad, in these rooms you can see the long lines of girls waiting for their turn to communicate with their foreign boyfriends or suitors. Those who want to have a more secure communication, rarely use the email service sold by the State.

Another innovation is the implementation of the e-mail “@nauta” with international reach with storage capacity of up to 50MB.

In the flood of information coming from the main official newspapers, nothing appears about about the restrictions on sites opposing government policies. Magazines and newspapers showing the daily life of the Cuban reality are sometimes censored by the controllers of the national servers.

The famous “Operation Truth,” where restless kids from Computer Science University launch daily attacks on the social networks in search of new dreamers with the revolutionary project, has sharpened its weapons.

For over five years the “Hermanos Saiz” Association offered young artists and writers the possibility of a fixed line, computer, and a fee to pay the telephone bill in exchange for “combatting” inconvenient intellectuals, wandering daily through the social forums to convince Internet users around the world of the revolutionary benefits and to submit a monthly report of their cybernetic fidelity.

With proceeds from one 11-hour session, the 118 Internet rooms should report an average of half a million CUC at least, assuming a massive influx to the connection spots, but with the rising cost of everyday life, connecting to the Web is still a luxury that few can afford if they use only the services the State provides.