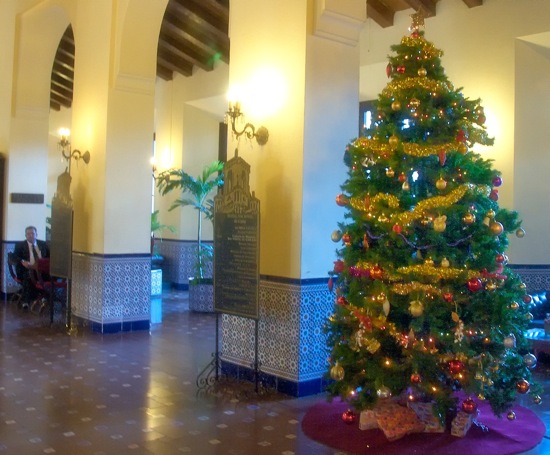 In Havana you will not see men dressed as Santa Claus, dressed in red, fat and friendly, handing out sweets to children at the entrance of shopping malls. In the rest of the island, you will not find a special Christmas atmosphere either.

The tourist hotels and the foreign exchange shops and cafes do displays trees with ornaments and wreaths. Not so in the national currency establishments, which prefer to dismiss all this paraphernalia. In these service centers, gloomy and in need of paint, portraits of Fidel Castro usually hang, along with slogans of the Revolution.

If it is a neighborhood store, you might see a handwritten list, sometimes with spelling errors, reminding people who have not paid for the appliances, four years after the State distributed them, to replace the American refrigerators from the 50’s and the black and white televisions manufactured in the Soviet Union.

Although the city does not have a Christmas atmosphere, ordinary citizens prepare to celebrate Christmas Eve at home on December 24. Those who have family abroad or profitable black market businesses can afford to buy a pig and roast it in the backyard, sipping beer or some good aged rum.

For those for whom things were not so bad in 2010, at 12 pm on December 31, they can eat candies, apples and grapes, and make a toast with cider. But most people wear out their shoes visiting the farmers’ markets in search of pork, black beans, yucca, tomatoes, lettuce …They will listen to salsa or reggaeton music at the highest volume, while drinking unbottled beer and lesser quality rum.

Those who live near a church usually attend a midnight Mass. In their way, Cubans celebrate Christmas. It was not always so. When Fidel Castro came to power in 1959, he slowly and intentionally threw aside one of the most deeply rooted traditions of Cuban families.

The final blow was given in 1970, when during the Ten Million Ton Sugar Harvest, with the pretext that the festivities interrupted the work in the cane fields, he removed December 25th from the holiday calendar. Those days off disappeared from the island by decree.

Because the triumph of the revolution coincided with January 1st, the first and second of January were declared to be days off. Thank goodness. If the bearded ones had taken power in March or August, for sure, we would not celebrate the arrival of the new year.

The absence of Christmas from the Revolutionary calendar lasted 27 years. In 1997, in honor of the visit of Pope John Paul II to Cuba, Castro re-introduced December 25 as a national holiday. It is an official holiday, but the authorities do not feel motivated to create a Christmas atmosphere for the population. Although it is celebrated in private.

As a child, I went with my grandmother and my sister to the house of Blas Roca, an old communist now deceased and a relative on my mother’s side. At that time, Roca was one of the heavyweights in the political hierarchy. I remember how my eyes opened, when I saw a whole pig roasting and a significant amount of other delicacies.

These were difficult years for almost all households, including ours. Because of a deadly swine fever, pig meat was a luxury. I do not know now, but then Castro trusted men like Blas Roca, and would give them giant baskets of fruit, candies, sweets and bottles of Spanish wine.

It was a time when people wore work shirts and plastic shoes. Beef was distributed according to the ration book. And very few dared to celebrate Christmas Eve, as forbidden as jazz and the Beatles.

Decades later, something has changed. True, Castro remains in power. The economy is adrift. Certain freedoms are denied. But today there is no fear that someone will make a report to “the appropriate authorities” for celebrating Christmas.

Obviously, one wants more. And while celebrating with his family, hopes that in the coming year, good things will happen. Cubans still have not lost their optimism. Fortunately.