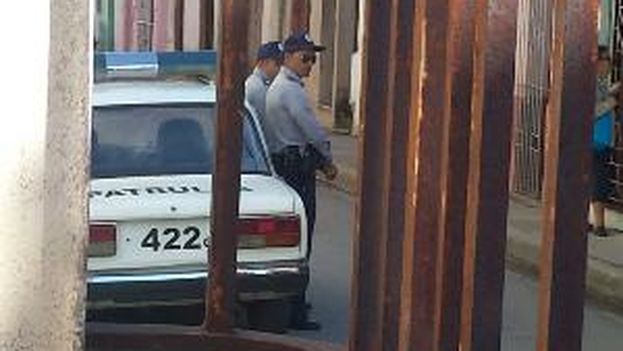 14ymedio, Camaguey, 8 January 2015 – The police, on Friday, demolished the roof of an evangelical church in Camagüey, according to Fernando Vázquez Guerra, coordinator of the Patriotic Union of Cuba (UNPACU) in the province. The center of worship, at number 27 Fourth Street in the Versalles neighborhood, is led by pastor Bernardo de Quesada Salomon, founder of Apostolic Move, a Christian movement that separated from the Cuban Council of Churches in 2003.

Police agents stormed the pastor’s house at dawn, and violently arrested him and took him to the police station on Avellaneda Street, near the railroad station, according to the evangelical pastor Alexis Segundo Medina, who lives in Camaguey.

Several independent journalists and activists have reported police raids and cuts to their phone service to prevent them from approaching the Versalles neighborhood, according to Henry Constantin, a contributor to 14ymedio, who commented before he was arrested for trying to leave his house.

In a phone call from the 14ymedio newsroom to the Cuban Council of Churches, the president of that body, Joel Ortega, showed surprise at the news, which he labeled as “worrying” and he asked for the phone numbers of the pastors involved to investigate the information.

The conflict between Quesada Solomon’s church and the authorities dates back to 2012. That summer, the pastor’s wife bought the building as housing, reserving an outbuilding for church activities and making some cosmetic changes. In October of the same year, the Department of Physical Planning fined the owner for not having requested a license for the work on the outbuilding, which the authorities considered independent of the house. The pastor affirmed that the Provincial Housing Department itself had assured him that a permit was not necessary. In addition, the outbuilding is included in the deed of the house, and so is considered a part of it.

In December, the religious leader was summoned to a meeting at the Provincial Department of Housing where he was told that he should demolish the floor of the outbuilding. Three years later, in December 2015, the minister complained that Camaguey Physical Planning had issued a demolition order against a ceiling constructed in the outbuilding.

Initially, the order required demolishing the roof and was announced on December 3, to take effect seven working days from that date.

On 4 December, Quesada made an urgent call to the international community through the digital site Religion in Revolution, in which he claimed there was persecution “against the Church where more than 600 people gather.”