Hablemos Press, Roberto de Jesús Guerra Peréz, Havana, 29 June 2015 — Offices of the National Police, the Department of State Security, and other members of the Interior Ministry arrested at least 226 Cuban activists and dissidents this past Sunday, 28 June, 2015.

Police operations were carried out in various provinces of the country to keep activists and opposition members from attending Mass.

Among those arrested in Havana were Berta Soler, leader of the Ladies in White Movement, Antonio G. Rodiles, director of Estado de SATS; José Díaz, of Opponents for a New Republic Movement; photographer Claudio Fuentes; and several of the former political prisoners who were released in January 2015.

In Havana, the arrests of various members of the Ladies in White and others of the opposition took place as these individuals were departing their residences early in the morning, and they remained surrounded by police officers throughout the day.

Besides Soler, Ladies in White executive committee members María Cristina Labrada Barona and Lismeri Quintana Ávila were among these detainees, along with eight other women.

Another 39 arrests of women activists took place in the area around Santa Rita Church, after the women completed their customary march along 5th Avenue in the Miramar district of Playa municipality, and gathered in Gandhi Park (adjacent to the church) to review the week’s activities. In addition, approximately another 41 activists and opponents–men who accompany the Ladies on their march–were arrested in the capital. 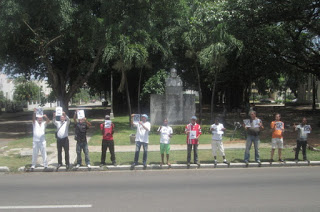 Dozens of Interior Ministry agents blocked the streets around St. Rita Church to arrest the Ladies and other dissidents, according to the activists.

The Lady in White Aidé Gallardo Salazar was struck and dragged by female officers. “They hit me on the head and face, and they tried to asphyxiate me,” Gallardo averred.

Other arrests of Ladies in White occurred in these provinces: Holguín (4); Bayamo-Granma (2); and Aguada de Pasajero in Cienfuegos (9). In the last province, additionally, “17 men who accompanied the Ladies were arrested,” according to activist and former political prisoner Iván Hernández Carrillo.

The independent reporter Agustín López Canino also was arrested upon exiting his home in the El Globo district, located on the outskirts of Havana.

“I will continue going there to St. Rita for as long as they’ll let me,” said López Canino when interviewed. “What I do is take down the facts and forward them to various media.”

He adds that, “The repression against the opposition movement has increased extraordinarily within the last six months and cannot be allowed to go on without attention focused on it.”

The Patriotic Union of Cuba (UNPACU), headquartered in Santiago de Cuba, reported the arrests of 103 of its members when they attempted to travel to the village of El Cobre to attend Mass.

The agents used violence to detain the opponents, who were transported to police stations and military bases, according to activist sources.

Ladies in White affirm that, “The regime wants to destroy the opposition, but we are prepared to give our lives for the freedom of the political prisoners,” stated Ibón Lemos y Mayelín Peña.

The reports received at Hablemos Press included figures totaling 226 opponents arrested across the Island on Sunday, although the actual number may be greater.