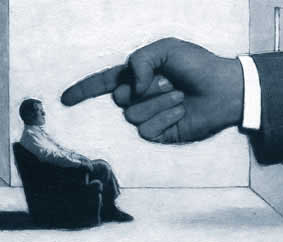 “One accused is presumed innocent, as long as he has not been convicted.” The principle is regulated internationally in the Universal Declaration of Human Rights, but for the Cuban state it is irrelevant, despite having pledged in 1948 to respect the rights contained in it.

When it comes time to legislate, ignoring the most basic respect for the law, what matters is to apply “drastic measures and make an example of” those who dare to take advantage of the conquests of the “Socialist Revolution.” Nor do they take time to reflect on the guarantees that the constitution of the state is obliged offer.

In 2003 the Council of State, chaired by the ailing Fidel Castro, enacted Decree 232 which imposes confiscation or loss of rights, by administrative authority, on the owners of private houses or locales where acts of corruption, prostitution, pimping, human trafficking, pornography, corruption of minors, etc. occur. It also applies to owners who lease their property without legal authorization.

The application of this provision assumes that “citizens’ ownership of housing and land is the result of revolutionary work for the benefit of working people. ” It declares it unacceptable that unscrupulous people take advantage of the socialist spoils for profit and personal enrichment.

As can be seen, in these cases the Council of State authorized the Provincial Housing Department to confiscate personally owned real estate. The procedure is simple. The Prosecutor or the Ministry of the Interior is required to submit the criminal investigations to the administrative body which, after 7 days, gives the order to confiscate.

I do not question the need to “combat with major rigor and energy” these evils. However, it is unacceptable that in the suppression of this conduct they should violate human guarantees, such as the presumption of innocence. Decree 233 is applicable regardless of what is determined by a court in a criminal proceeding.

If those prosecuted under this provision are found guilty by the courts, they are doubly penalized. They lose their freedom and their possessions. If found innocent, they are punished for no reason.

In either case there is a violation of fundamental rights. The victims of this provision do not have an effective remedy before national courts for protection from administrative acts that violate their rights recognized by the State Constitution of the island, which “guarantees the ownership of housing to those who possess a fair title.”

The Civil Procedure, Administrative and Labor Law anticipates an administrative dispute process against acts and decisions of agencies of the State Central State that violate citizens’ rights. However, the provision issued by the Council of State does not permit the appeal of the decision of the Director of the National Housing Institute, neither administratively or judicially.

The exercise of human rights in Cuba is restricted and violated by the law. Decree 232 is an example. In its application, it destroys the presumption of innocence and places the citizen in a defenseless position.