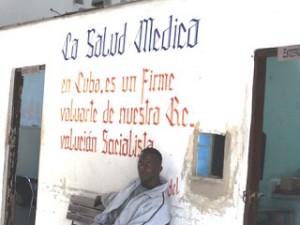 Havana, Cuba, July 2, 2013 Lilianne Ruiz/www.cubanet.org —  Ruben Benitez is not his real name. His real name is not used because he is a father and family man and afraid of losing his job. Doctor by profession he remains disconcerted by the death of his father which occurred in the Calixto Garcia hospital.

According to which he himself said, upon arriving at the Intensive Care ward, the words of the nurse who helped him were:

The ward was filled with water puddles due to a broken air conditioning pipe.

Dr. Benitez knows the rules especially when it comes to requiring an admittance, and added:

“Me, clearly, and that’s it, because I wanted to solve my problem.”

He assures it was not for lack of medications. “Nor for lack of attention from medical and nursing staff, despite all situations of indolence and some other abuse on finding his too demanding companion uncomfortable. It was because the hospital was so filthy,” he said.

“The medical staff doesn’t say so, apparently, but in a hospital where the same elevator carries the construction workers, the doctors, and even the trash, you can’t carry a seriously ill patient because that’s taking an infection from the mouth right to the lung.”

Doctor Benitez’s father was admitted for chest pain and he developed complications ending up with hypostatic pneumonia, which killed him.

The doctor looked at me with surprise when I asked if he thinks you shouldn’t transport a seriously ill patient in an elevator with other people. On asking him I remember my father being admitted to the hospital and the number of times I went up with him lying on a gurney, trying to protect him from the man who was carrying the trash, in the presence of doctors talking, which forced me to see that situation as “normal.” 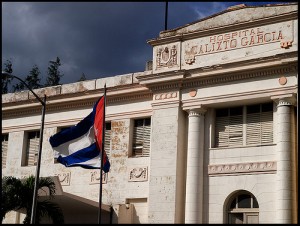 “You can’t be doing construction in a hospital with patients inside. The floor is cleaned every day and within the ward (after fixing the air conditioning) apparently it’s cleaner. But outside, it’s not what you see, it’s that you can run a finger over the floor and it’s covered with cement dust, because they’ve been doing construction in the hospital for many years,” the doctor commented.

“It’s very depressing to see a family member in this situation and not be able to do anything,” he said. “He died of hypostatic pneumonia, but it can’t be determined if he contracted it simply by lying flat, or whether it was the result of an infectious environment that should have been avoided.”

He says he rejected the idea of an autopsy because it mean extending the suffering without resolving anything, no power to sue anyone.

According to Dr. Benitez, in his role as a companion, the most shocking was the sum of all these terrible conditions of life there, from the disruption of the builders to the sewage water running in front of the ICU room, when the first downpour of the season.

“When you don’t know the topic it’s very easy to fool you, but when you’re a doctor, not so much…”

In Havana, a few years ago it was said that the director of the Cancer Hospital had forbidden their workers to talk about the relationship to talk about the construction of the hospital and the number of deaths:

“Because it’s logical that there is a greater risk death for patients who are receiving expensive chemotherapy treatment (which normally causes immuno-suppression) and who ingest dust,” the doctor pointed out.

When he was a student, in 2004, in the Fajardo hospital, on a visitor’s pass, it could have been the same builder shouting over a running drill. “Even though it was on another floor, the reverb didn’t let you talk.”

At least ten years ago they started the repair work on the capital’s hospitals. What I could never understand, neither the doctors nor the patients, is why they all have to be restored at the same time.

Some, like the Cardiovascular Institute or the Fajardo Hospital, have been declared “terminal.” Others seem to have stalled, like Calixto Garcia. The Clodimira Acosta obstetric-gynecological appears to be a lost building, despite having started on the reconstruction work.

Statistics reveal that the number of deaths by infections in hospitals being repaired have tripled.

There are no alternatives but to go, when you get sick, to the same dirty and dilapidated hospital we’re talking about.

Only those with a high level of personal relations are allowed to receive medical attention in the elite places like CIMEQ or the Cira Garcia International Clinic.

The experience in the “hospitals for the people,” make Cubans repeat, as a collective consciousness, that “What you can’t do here is go to the hospital.”