She came in through the visitors’ entrance after passing the security check. When she pushed through the revolving door into the grand hall, standing there alone, I greeted her with pretended formality: “Welcome to the United Nations.” The hall was packed with Model UN students. A distance back, an unofficial “welcome committee” stood by: Tuyet Nguyen, correspondent for a German news agency, who had come to escort us in on behalf of the United Nations Correspondents Association (UNCA), and three guests. Two media crews filmed her entry; no one seemed to notice.

She was delayed from filming a last-minute CNN interview, so I was anxious to rush her through the next steps. Passes were secured at the information desk –she used her Cuban passport as ID and was photographed like any other visitor. We hurried downstairs and through the basement parking lot to the Library building where journalists’ and UNCA offices are located during the main building renovation. As we walked fast and through successive security points, I told her the Cuban government had blocked our plan and we would have to improvise. We agreed it did not matter, she was at the UN and she was going to speak regardless. Just minutes before, I had read on my phone that the tantrum had played out at the highest levels; Cuba’s Ambassador had filed an official protest asking the UN Secretary General to call off the “grave attack.”

Cuba is very influential at the UN, it has one of the largest and most active representations. China, Russia, Iran, and the likes are strong supporters, plus it exerts great influence over many other governments ⎯many host Cuban medical missions opportunely or share “revolutionary” sympathies, others just want to avoid trouble. Cuba’s diplomats are known for expertly working the UN bureaucracy and rules. The room change was the least of my worries. At any moment, I feared, we could be stopped at a security check, escorted out of the building, or attacked by Cuba’s diplomat-thugs. These things have actually happened at the UN in New York and Geneva.

The briefing was planned weeks earlier for the Dag Hammarskjold Library Auditorium, a large and elegant venue with the necessary audio equipment. But, the day before, the UNCA liaison mentioned “certain problems.” The auditorium would not be available and we would not have equipment for the simultaneous interpretation. I imagined great pressure was at play. Fortunately, with a few UN battles under my wing, I had asked that this be kept from Yoani’s official schedule until the invitation had been sent out. It would be harder to dismantle an event announced to UNCA members, 200 correspondents from all over the world.

Cuba had complained that UNCA was being “manipulated by spurious interests,” but the truth is much less sinister. I represent a tiny human rights’ group with the most meager of resources; most of our work is volunteer. Familiar with UNCA (http://www.unca.com/), I knew it hosts press briefings with newsworthy sources and freely decides who to invite. So, when I asked them if they would like to host Yoani Sánchez, they immediately answered yes ⎯I assumed because she is a world-famous blogger and journalist. After details were agreed on, I contacted the person handling Yoani’s schedule (a mutual friend volunteering his efforts). Once a time was agreed, I sent UNCA her biography and suggested media advisory. Then, I hired an interpreter. It had all been simple and transparent.

The briefing would now be at “UNCA square” within the journalists’ temporary area during the remodeling. To my dismay, when we arrived we found it was just an opening within a hallway surrounded by offices. Immediately next to a large copying machine was a tiny table with three small chairs crammed behind it. To the side, another small table had refreshments. In the middle, there were no more than ten chairs. Most people had to stand in the hallway and adjoining offices. We looked at each other puzzled, so I pointed Yoani and the interpreter to the chairs, leaving the third one for the UNCA host. Though the designated moderator, I stepped aside ⎯there was no room and no need for another person. Having seen her over the previous days in New York and Washington, I knew all we needed was to let Yoani speak. 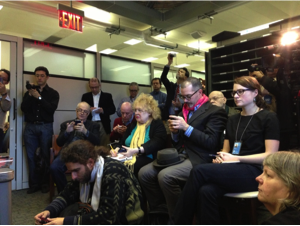 A few film crews and correspondents from news agencies and several countries were there. Italian journalist Stefano Vaccara explained to me that no biographical commentary was needed, as everyone knew who she was, and proceeded with a heartfelt introduction. She delivered her remarks with no notes, as usual, her voice strong despite no microphone (unfortunately not the interpreter’s). Orlando Luis Pardo, the Cuban blogger/photographer traveling with Yoani, Mary Jo Porter, the Seattle engineer who founded a volunteer translating service to support Cuban bloggers, and I, sat on the floor ⎯there was no space elsewhere.

Yoani began by saying she was proud that her first time at the U.N. was “with my journalist colleagues.” Though clarifying that she came as a citizen and joking about being used to working in small spaces, she pulled out all the works. She called on the United Nations to support human rights in Cuba and declared it was time it “came out of its lethargy and recognized that the Cuban government is a dictatorship.” She asserted: “Cuba is not a government or a political party and much less the fiefdom of one man.” Further, she called for UN support of an international investigation of the suspicious death of Cuban dissident Oswaldo Payá. (See 3:30 min video clip in Spanish here.

During the Q & A, the correspondent for Cuban news agency, Prensa Latina, asked two questions. Unsurprisingly, they were from the “40 questions for Yoani” that Cuban regime supporters have trailed her with wherever she goes. He sounded pretty silly and he must have known it, as his hands were shaking. She dispatched them quickly, ably, and with aplomb. When it was all over, she filmed a quick interview with The New York Times and rushed to the airport for the next leg of her trip. We left the building relieved to find no hecklers or attackers on the street.

It’s remarkable that a 37 year-old petite and unassuming woman blogger took to the United Nations headquarters in defense of fundamental rights bearing no more than her determination and the strength of her word. The poised and eloquent “little person,” as she calls herself, made a mighty military dictatorship of over five decades run scared to stop her from speaking. Forced into a cubicle, she could not be silenced. Word spread quickly throughout the world not only of her message, but of the vicious will to stop it. This story captures the exhaustion of a regime whose tactics become futile before the force of a peaceful rebellion that will not be stopped.

Only five hours after the briefing, a Google search produced four pages of links to news stories from around the world in Spanish alone ⎯all highlighted the Cuban government’s bully tactics. The regime had actually generated the lead to a great story, made themselves look like fools, and allowed Yoani to shine brighter!

Recapping the event with Carmen Rodríguez, UNCA member from Radio Martí, she recalled José Martí’s words: “A just cause coming from the bottom of a cave is more powerful than any army.” At the UN, Yoani had given it a singular twist: “If we were holding this meeting in the bottom of an elevator shaft, we would have more freedom than in Cuba.” From start to finish, her UN foray could not have been more perfect or poetic.

All rights reserved, Free Society Project, Inc.
Reproduction and redistribution of this material
is authorized as long as its source is cited.