Luis Manuel Otero “covered his body with human excrement” and in a poster he demanded “free art. No to Decree Law 349” adopted by the Council of Ministers. With the exception of Nuñez Leyva they were all arrested. In the case of Otero Alcántara the arrest was carried out with an excessive use of force and along with Iris Ruiz, Amaury Pacheco and Soandry del Río, they were transferred to the police station located on Zanja Street in the capital.

Along with José Ernesto Alonso, Iris Ruiz was released four hours later, accused of creating public disorder. Luis Manuel, Amaury and Soandry were transferred to the Vivac detention center, where they are accused of public disorder and aggression.

We remind the Cuban State that the freedom to comment on public issues without censorship or limitations, as well as to inform public opinion, is indispensable to guarantee the full exercise of participation in public affairs, which includes the freedom to hold peaceful demonstrations and gatherings, to criticize or oppose the government, and to publish political material.

The arrest of the artists is arbitrary, irrational, unnecessary and disproportionate, because it violates recognized international standards in relation to the guarantees of due process.

The procedure for legal detention in Cuba allows for arbitrary detentions, currently used by state agents as punishment for the legitimate exercise of freedom of opinion and expression, assembly and association, recognized in international human rights law.

States have the obligation not only to abstain from violating the rights of people who take part in a meeting, and to respect and guarantee the rights without any discrimination for prohibited reasons or of any other nature or any other condition of political opinion. The freedom to organize and participate in public meetings must be guaranteed to all natural persons, groups, non-registered associations, legal entities and companies.

In Cuba, access to public participation spaces is excessively and abusively restricted, as a result of which the full and free exercise of the freedom of peaceful assembly is practically impossible. 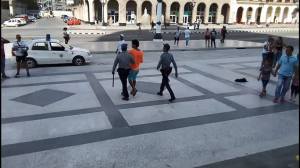