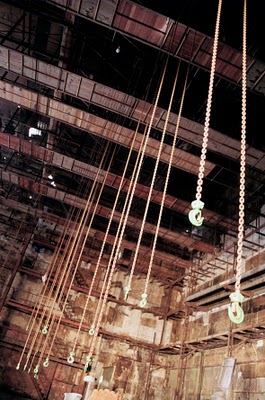 In Cubanacán, at the western exit off Havana, not far from where the commercial imagination of the Fifties gave birth to a racetrack and even a drive-in, the remains still exist of what was most important film set in Latin America.

A first-class studio-hangar, formerly soundproofed, formerly luxuriously lit and with a formerly First World atmosphere (from before there was even a concept of the First World).

The “Forum,” it is called today by its proud keepers, not without nostalgia, although they don’t know what lies inside this cinematographic cube in ruins. Ah, the Forum, the Forum, I repeat after having worked in its belly of hernias open to the moon and the sun and to Cuban cyclones. A cinemummytographic forum…

It stinks. Sacred humidity. Mediatic Middle Ages. The smell of stage machinery of fiberglass and also the putrid water that optimizes the acoustics thanks to the swimming pool underground: the mantle of the fossilized water table of island capitalism, homeopathic relic of the Republic that the Revolution didn’t manage to dry up.

It stinks of a star-system that never made it to Hollywood, neighborhood supernovas immediately transformed into exiled stars or conscripts of Cuban Institute of Radio and Television. Because something cracked inside the Forum, something opened a gash in the space-time surrounding this bubble of fiction, live or tape-delayed.

Our beloved Cuba, compañeros—why postpone the swear word—mercilessly fucked this Forum up.

I’ve been there, so don’t dismiss me. I don’t know what I’m talking about anymore, but I have been there, among its classic six scenic coffin-like walls (except the ceiling, which is now a Hubble-style lookout facing the magnificence of outer space).

I’ve clicked my Canon camera among graffiti of dollar videoclips and amorous bat shit, its only ultrasonic defenders against the desert budget of the Cuban film industry officialdom.

At night, I’ve heard what sounds like the hollow laments of a young girl. What sounds like her empty moans, rising from her chest to her throat. The pouts of a dead girl in full post-preterit abundance.

Once I asked an audio assistant, a rare angel who balanced the microphone boom and an archaic analog console. “There,” I asked her, “Point there, please, and record.”

And she obeyed me shivering, doubting my sanity, and turned it up to the maximum, her impedance—or whatever they call the sensitivity—(she was, all of her, pure glass technique), and spent entire minutes with her eyes hidden under a pair of headphones bigger than her head (a little panda bear that very quickly became extinct).

By day I’ve seen it raining inside, in a gorgeous dive, a wonder in backlight thanks to the HMI luminaries perhaps from the Fifties too. Our audiovisual art is doomed to be retro (besides retrovolutionary, of course).

And sometimes you have to stop the shooting because the buried pool emits unusual waves from under the cement floor, a cemetery under our feet over which Tomas Piard, for example, filmed the nudes of his tragedies, always allegorical to the two thousand or year zero of island socialism, insulated in that Forum, marginalized even from the Made In MINCULT censorship.

I don’t want to go back there. I won’t return, except as a fugitive from the Cuban Made in MININT justice. And exclusively only to find there death in a shooting, prop bullets that split my heart with the greatest fiscal sadness, while I magisterially make love to my love, who will probably be that girl with the headphones so as not to distract her from her orgasms with the patrol sirens, nor the loud voices of anonymous State counterintelligence colonels (the State is never intelligent), nor my screams of an animal hunted to death, shrieking with the frustration of a blade-runner android who is bleeding and is once again a noble child before using up the batteries of his life cycle.

Like a bad road-movie, the only ones worth the trouble.

Like in a nightmare script full of clichés, the only ones that don’t seem recited by the actors.

Like Cuba, fuck!, supine position encased in a forum where there was never enough talent to shoot happiness.

In Cubanacán, at the western exit off Havana, not too far from where the dying imagination of those ten years will not give birth or abort absolutely anything after the desire and death of my delirium.