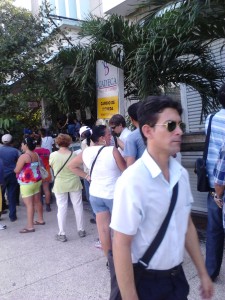 HAVANA, Cuba, October, www.cubanet.org — The official announcement in the newspaper Granma this Tuesday, October 2, with its timeline for instituting the changes regarding currency unification, unleashed a torrent of rumors, which some say circulate faster that news from the Communist Party.

But there wasn’t much to it. There was no change of any importance in the value of the two currencies. Stressed-out Cubans, who must rely on an average monthly salary of some 445 CUP (or Cuban pesos), will still have a “rope around their necks,” worrying about how to pay for goods priced in CUC (or convertible pesos) at the fixed exchange rate of 1 CUC to 25 CUP. Given the sensitive nature of this topic, however, it was inevitable that contradictory analyses would start cropping up first thing Tuesday morning.

Almost everyone believed that there would be a gradual strengthening of the Cuban peso until the two currencies reached parity and the CUC was finally phased out. In the opinion of some, the rate of exchange could be around 1 CUC to 20 CUP within a few months.

A neighbor in my building, who subscribes to this line of reasoning, noted that this could create pressure on the currency exchange bureaus (CADECAS) if people tried to gradually get rid of their CUCs, especially now that the rate of exchange is still at 1 CUC to 25 CUP.

A diametrically opposite point of view was expressed by a self-employed worker as he was preparing to begin his day. He believed it might be a trap by the government to collect the money in circulation and deal a fatal blow to the new “potted plants.*” According to this worker, a third currency would be created and this would be the one to survive. All Cuban pesos and CUCs would have to be exchanged for it but there would be a maximum amount that could be exchanged. Anything exceeding that figure would represent a loss to its owners. It would be a kind of punishment for those who sold their homes at astronomic prices in hopes of leaving the country.

Twenty-four hours after the release of the official announcement I decided, one way or another, to gauge the public mood by visiting various CADECAS around the capital. There seemed to be a prevailing calm and the lines of customers were no longer than usual at the entrances to currency exchanges in the Focsa building — located at 23rd street in front of Copelia — and at the National Bus Terminal. I joined a line of customers at the latter to exchange some money so that I could make inquiries with the cashiers.

The  two or three people with whom I was able to speak did not completely understand the announcement which appeared in Granma, though I did detect a certain level of anxiety about what could happen. One of the people in line with me, an older gentleman, did not hide his mistrust of the authorities and recalled what happened with the currency change in the 1960s when people lost a substantial part of their savings. For her part, the cashier who waited on me acknowledged that on Tuesday morning people were asking for Cuban pesos with some insistence. However, by Wednesday — the day of my visit — demand was back to normal.

After chatting with some of my colleagues, an interesting point of view emerged. It was felt that this could be a public relations maneuver on the part of the government to calm the many gullible people who believe that, with the end of the dual currency system, the country’s economic problems will be solved. The Party Guidelines indicate that officials contemplated currency unification but they now know neither when nor how to properly pull it off. At least the published timeline shows they are giving themselves a little more time.