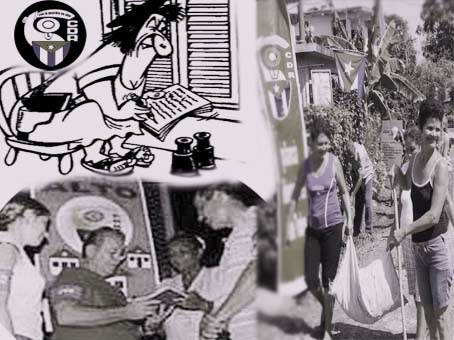 Once they start their working life they join the country’s only union, and the organization for their professional sector. Most do not have any assigned function, but they pay their dues.

The rule is that everyone is integrated into several of the social and mass organizations — all of them the only ones of their kind in the country — according to their educational level, their professional sector or specific interests. Their lives, social and work, and that of their families depend on this integration and on participating in patriotic, political and military activities.

“Revolutionary integration” violates freedom of association, which includes the right not to be forced to join an organization. It is a requirement to obtain a university degree, to get a job, or to ascend in the workplace, where one also is required to be integrated into political organizations.

State institutions, including schools, demand and verify your membership. Sometimes directly, others through a business subordinate to the Ministry of the Interior. Security and Protection, or the organs of criminal investigation, coordiante with the social and mass organizations.

For example, the administration of the Committees for the Defense of the Revolution (CDR), when a case is being investigated, provide private and intimate information and opinions, in many cases personal and subjective, that are later used by the prosecutor.

In the sentences of the courts, in addition to the personal data, it is taken into account whether the accused person participates in activities “targeted or programmed by mass organizations” or whether the person publicly expresses disagreement with socialist principles. This determines whether he is good or bad person.

“Revolutionary integration” is the mechanism of social control that allows the political group in power to establish systems of rewards and punishments. People who do not join these organizations for religious reasons, or who publicly express their political opinions, are condemned to work immobility, isolation and social discrimination.