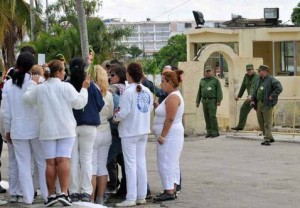 More than 50 dissidents and activists were arrested on December 10 in Cuba by the combined forces of the National Police and State Security for attempting to mark the International Day of Human Rights, according to the Cuban Commission for Human Rights and National Reconciliation led by Elizardo Sánchez Santacruz.

The Universal Declaration of Human Rights was signed in 1948 and the Republic of Cuba is a signatory. In several parts of the capital, the atmosphere was tense with the notable activity of students and workers, who were mobilized to counter the marches planned by the Ladies in White and other organizations of the emerging civil society.

Around the University of Havana, hundreds of students from the Faculty of Law were jammed in the staircase and its surroundings. They had been convened with the objective of holding a counter-march to respond to the expected walk of the Woman in White.

“We have been here since 11 this morning. They told us our mission was to contain and delivery a worthy response to the provocations of the mercenary groups,” said a university student.

Other sites of the Plaza de la Revolution municipality, likely meeting points for the dissident groups, were monitored or taken by young people who celebrated and listened to music.

Such was the case Villalón Park. Many young people, keeping pace with government slogans and songs from the new trova, attended a ceremony to mark the World Festival of Youth and Students to be held in South Africa.

Coincidentally, local activists and opponents, including Dr. Darsi Ferrer, had planned to hold a rally there to commemorate the 62nd anniversary of the most famous document of the United Nations.

Outside of Havana, several acts of repudiation and arrests were reported, according to independent journalists in Villa Clara and Holguin. At Guantanamo, the opponent Néstor Rodríguez Lobaina had planned an event in a plaza in the eastern province.

Through Twitter, Martha Beatriz Roque reported that the Ladies in White were divided into three groups. Two groups demonstrated at the entrance of the Combinado del Este and 1580 prisons, on the outskirts of Havana, where 11 political prisoners remain from the Group of 75. The third group walked near the Ministry of Justice and the Directorate of Prisons, in the Vedado.

They went with pink gladioli in their hands. As on the night of Thursday the 9th, when they had to endure verbal and physical aggression by government mobs throughout their walks through the central streets of the capital.

In 1998, the president of the Lawton Foundation for Human Rights, Oscar Elias Biscet, convened a 50th commemoration of the Universal Declaration of Human Rights at Buttari Park, and since that time it has become common for Cuban authorities to ban, suppress and arrest those try to celebrate on 10 December in public places. “Legally there is no violation of law. Cuba is a signatory to the Universal Declaration. Therefore there is an inconsistency of legal procedures,” says Larisa Diversent, an independent attorney.

The government of the Castro brothers does not recognize the opposition, accusing it of “being in the service of the U.S. and other forces of reaction.” This is one of the reasons why the human rights activists are not allowed to demonstrate.

It is also because the government believes that “in Cuba human rights are fully respected.” The opposition thinks the opposite. “Not allowing us to demonstrate is proof of it,” says a Havana opponent.

Although the dissidence in Cuba is peaceful, the regime always fears on that date. Perhaps a bit more in 2010, when in recent weeks in several locations, there have been protests and incidents involving ordinary citizens.